Yellowstone National Park was established in 1872 by Act of Congress and signed by President Grant. It is widely thought to be the first national park in the world. The area was bypassed by the Lewis and Clark Expedition and exploration really started in the late 1860s. Initially, it was overseen by the US Army at Fort Yellowstone in the northern section of the park. Administration passed to the National Park Service following its establishment in 1917. 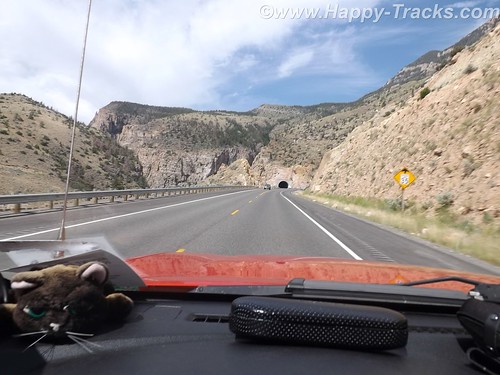 We left our cabin in Cody after breakfast and entered the park though the east entrance with plans to make a backward S and leave through the north entrance by day’s end. 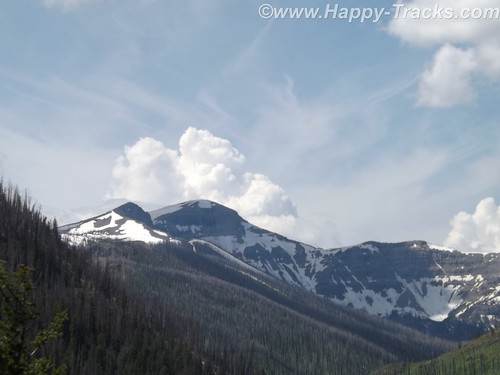 On entering the park, we received our separate handout sheet advising against feeding the animals and telling us that wild animals were dangerous. It also cautioned us to stay in the car when animals were nearby. The road in took us around the shoreline of Yellowstone Lake and into Lake Village. 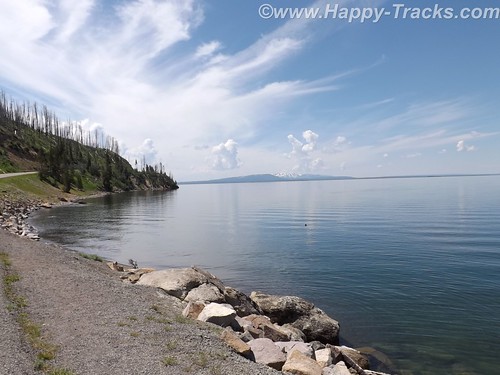 As we could first see the lake, we entered the area of the park where sulphur vents and you could smell it as soon as we entered the region. We stopped by the lake and took a few pictures then headed on towards Lake Village. On the way, there was a car stopped in the road for no apparent reason. As we got closer, we realize that they had stopped and gotten out of the car to take pictures of a bison in the field. 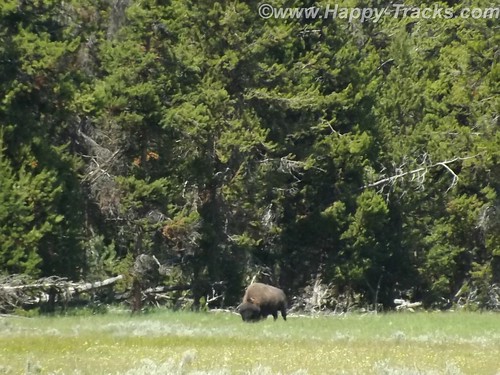 There was a pulloff nearby and we backed up to it and parked out of the road and took a picture of our own. We learned (and it would be reinforced throughout our trip) that when you see a car stopped, chances are someone has sighted a wild animal, even though the park literature reminds you frequently not to stop in the road.
We continued on to Lake Village where we would find a commercial area (gas, food, restaurants) as well as a visitor center. The ranger at the visitor center gave us the latest updates for expected eruptions at Old Faithful, one of our “must do” sights. 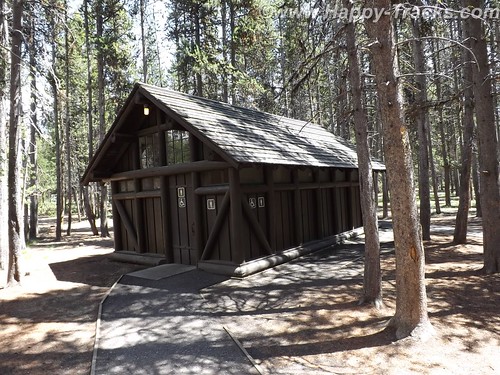 Shortly after we passed the West Thumb Information Station area and turned to continue on the Grand Loop Road, we were waved down by a young man who had been bicycling. His girlfriend had fallen off her bike and needed assistance. He said she was shaken up and we volunteered to call for help. Punching the OnStar button, we soon were in contact with their personnel who patched us through to emergency services in the park. While we were doing that, another truck stopped. Luckily, it was being driven by an off duty EMT who was able to assess her condition and was drafted to transport her and her bike over to the West Thumb first aid station. We informed the emergency services folks of the resolution and went on our way. While we were glad to be of assistance, we breathed a sigh of relief as we realized we would still be able to make the next eruption of Old Faithful if we got on our way.

There was a crowd of people there, both for the geyser show and for the lodge, restaurant and shopping area. We found our spot on the viewing deck and waited for the show. As the time drew closer, more people crowded into the area.
While we were waiting, we saw steam erupting from the other geysers in the area but still we waited for the most famous one. After several smaller spurts and steam, the big show came and we were suitably impressed. 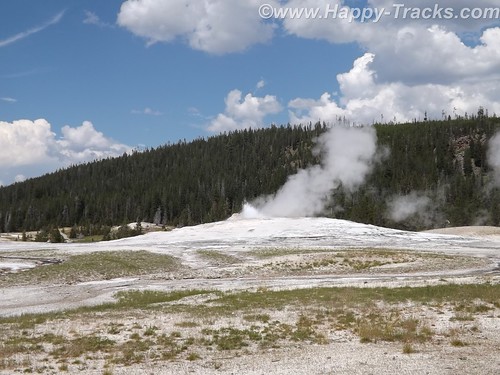 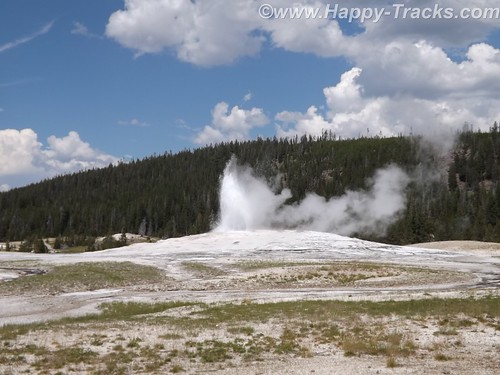 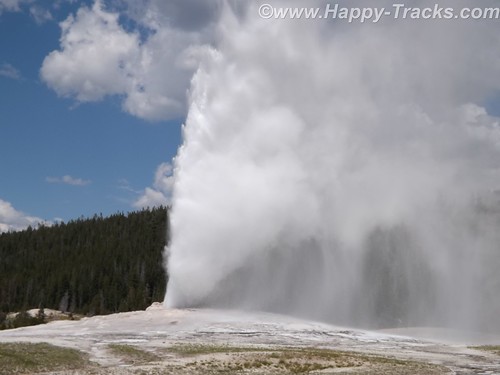 It is truly amazing to watch Mother Earth in action. We had seen pictures and video but its nothing like seeing it in person. One thing that no one ever mentioned was the sound and the noise. Anyone who has ever worked in a steam plant (such as a nuclear submarine) has nightmares about the sound of high velocity steam escaping. Wow.
After the show, we went into the Old Faithful Lodge for lunch and to visit the shops.
We continued on to the Grand Prismatic Spring. The parking area there is small and was very crowded with folks waiting for others to leave before being able to park. The hot spring is the largest in the US and the third largest in the world. First records of it appear in a trapper’s notes from the 1830s. The colors near the edges are the result of microbes in a mat around the mineral-rich water. The center blue area is sterile due to the heat and its color derives from its depth and purity. 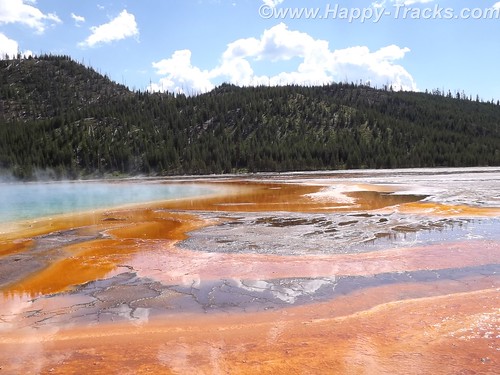 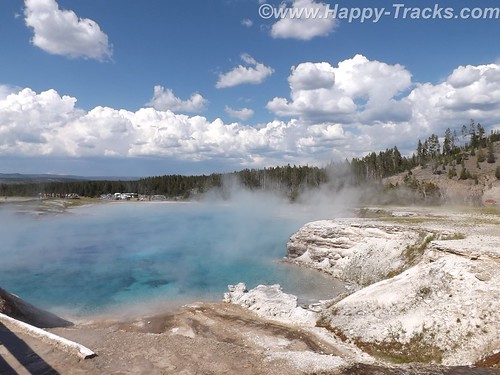 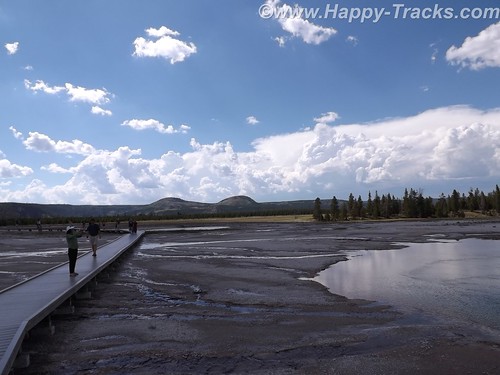 The microbial mat is extremely fragile and there are numerous warnings and prohibitions against walking on or otherwise disturbing the mat. While we were there, someone’s hat blew into the pool. Park personnel remove things like that with poles. On August 2, shortly after our visit, a tourist’s aerial drone mounted camera crashed into the pool. It’s still being investigated about how (or if) to remove it and the owner is facing charges.
Connecting the parking lot and the spring is a pathway that includes a walkway over an ice cold stream fed from the mountains. What a contrast. 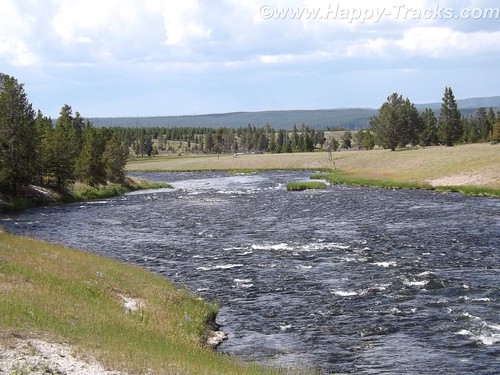 That area is the Midway Geyser Basin and contains the dormant Excelsior Geyser as well.
We continued around our backwards S on the Grand Loop Road to visit Steamboat Geyser, the world’s tallest active geyser. It infrequently (and unpredictably) has a major eruption up to 300 feet in the air. It had been almost a year since its last major eruption. It has more frequent minor eruptions, including the day we were there. 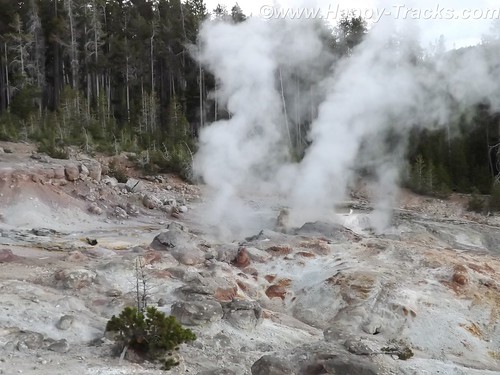 But as we started back towards the truck, the skies let loose and it poured rain. We had umbrellas and windbreaker/rain jackets…back in the truck! So we half walked, half ran back.
We continued our ride towards the north entrance and saw the now telltale sign of cars stopped along the road. 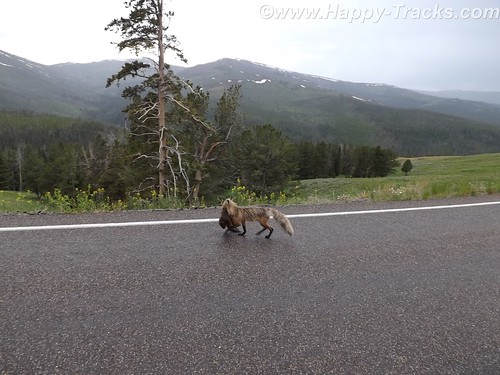 Animals? Sure enough, we saw this fox with something in its mouth coming along the road. We never were able to identify the prey in its mouth which appeared to be some sort of small mammal.
Traveling along, we again saw stopped cars, this time there were a number of them stopped in both lanes of the road. 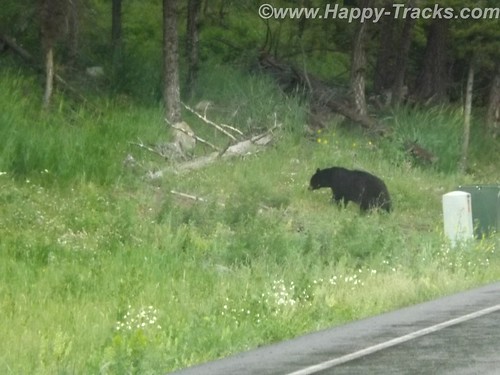 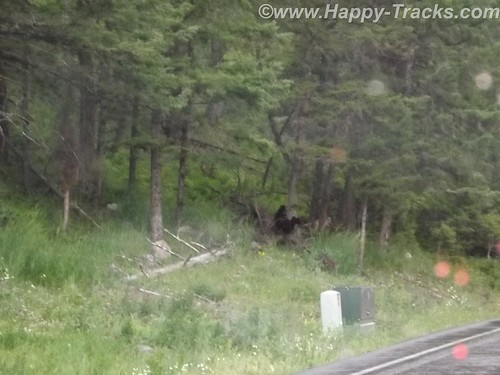 After a bit of sitting and waiting, we realized it was a black bear and three cubs working on crossing the road. Eventually, the adult bear crossed and the three cubs remained on the left side of the road. Then, to our absolute amazement, adults started getting out of their cars –with kids– and started walking up to where the bear and the cubs were on opposite sides of the road! Unbelievable! Finally some of the cars started moving by passing the parked and temporarily abandoned cars. When we were able to move on, the cubs remained on the left, the mother remained on the right and the humans kept on getting out and getting closer.
We stopped at Roosevelt Lodge and Cabins. This was the lodge used by President T. Roosevelt when he visited the area to hunt. There are also cabins, a restaurant and a small camping store there. We kept our comments about the bears and the tourists quiet as we weren’t sure how many of the patrons there had been part of the group. While paying for our purchases at the camping store, we got into a conversation with the clerk who was an older gentleman who had retired to this area from the New Bern area of NC. 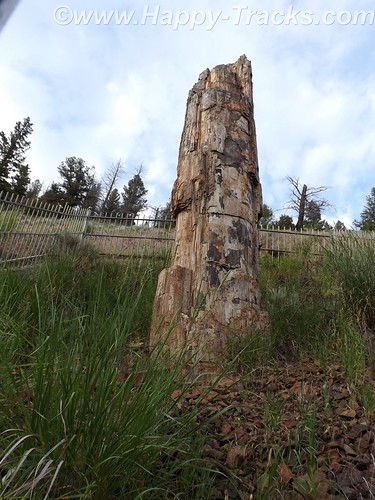 From there, we visited a petrified redwood tree that is the same as present-day redwoods in California, giving testament to a very different Yellowstone in the distant past.
Our next wildlife sighting was another bison standing by himself in a grassy meadow. We found this one by ourselves without the aid of other cars. 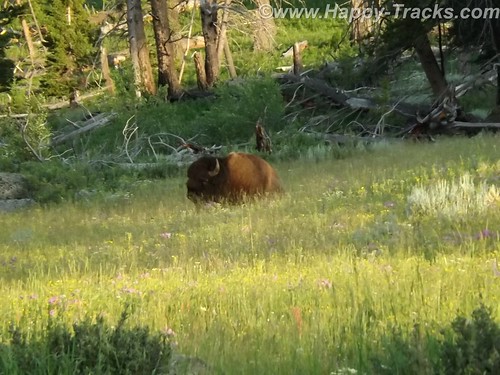 We next arrived at the Mammoth Hot Springs resort and campground at the site of the old Fort Yellowstone. The public buildings are reclaimed barracks and dining facilities. The springs are a series of cascading pools on a hill of travertine. 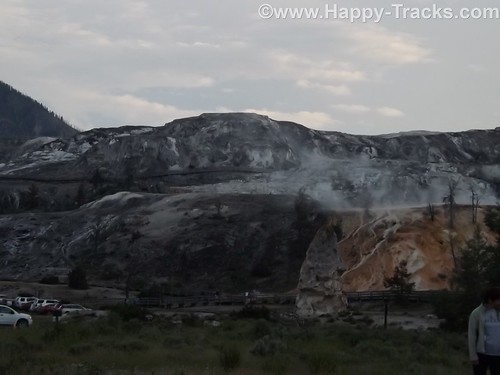 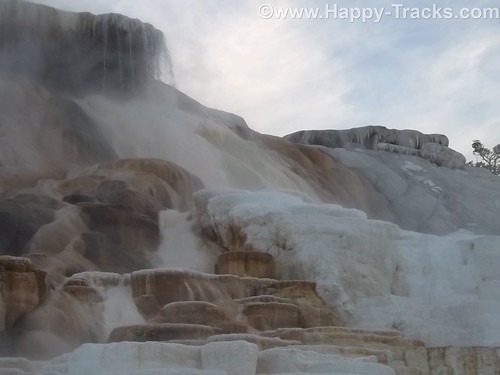 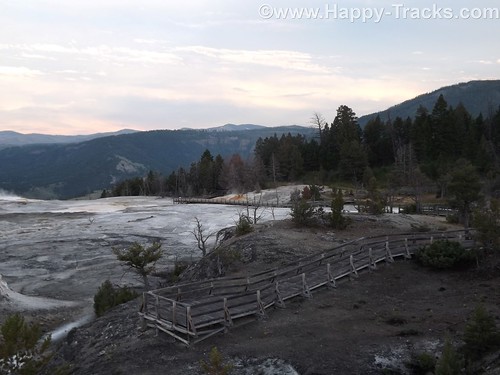 There is a roadway which winds up the hill and lets you look down on the pools and the historic district. These pools, still more hot springs, really give you a different view than the Prismatic Spring. There was a dormant hot spring cone, Liberty Cap, too. 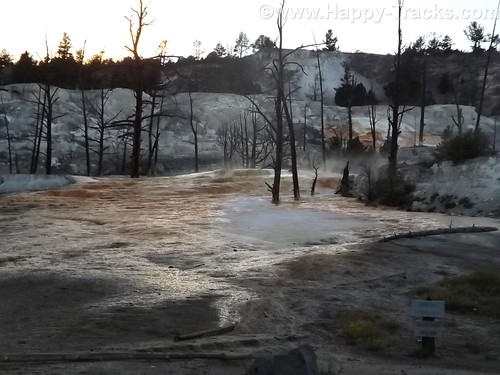 Leaving the Mammoth Hot Springs, you wind down and behind the historic district and onto a winding road out of the park. Just as we reached the boundary, a herd of antelope was crossing the road along the stream bed. Approaching dusk prevents us getting more pictures.
As we exited the park, we followed the Yellowstone River through the canyon to Livingston MT where we found a motel around 11:00. The motel was a Best Western and had a covered garage with a keypad lock for parking which seemed unusual and we never did really figure out why. At first, we suspected the winter weather but it seemed to be the only motel in the area with that feature. It also had an indoor heated pool which our room’s door faced. The humidity outside the room was a reminder of the hot springs we had seen that day.
This is a longer than usual post but it also was a longer than usual day for us. While we don’t advise spending only a day when you get to visit Yellowstone, we proved you could actually see much of it in a day.
You can see all of the pictures from this leg of the trip here.
We invite you to continue along with us and hope you enjoy the account!