Glacier National Park is located primarily in Montana and is the country’s 10th NP being signed into law in 1910 by Pres. Taft. In 1932, the US and Canada governments formed the first International Peace Park by coordinating on the management of Waterton Park and Glacier National Park to form Waterton-Glacier International Peace Park, sharing management strategies on protecting the waters, plants and animals.
Our route allowed for the more scenic route rather than the most direct which took us to Three Forks where we stopped at the Wheat Montana store. 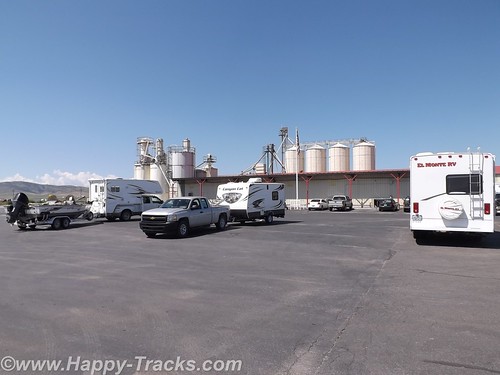 Wheat Montana is a combination grain elevator, bakery and restaurant with a gas station and convenience store. I suppose having the grain right on site conveys an image of freshness. The bakery certainly smelled tasty! We continued on through Helena and then up to the southeast of the park, then along the scenic Route 2 and eventually over to Kalispell. 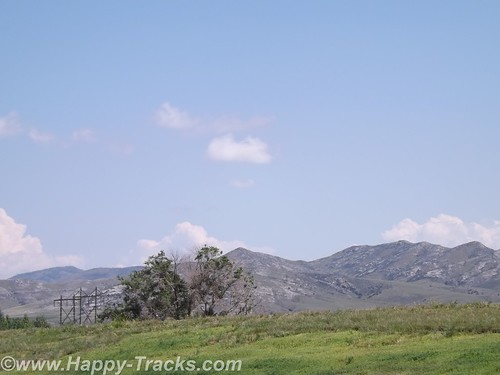 We stopped for lunch in Helena. When we came out of the restaurant, the gentleman who had sat across the aisle from us inside started up a conversation. He told us he was traveling to visit relatives and was telling us he was from a small town in Canada near Edmonton and told us about a bridge that we should make a point to see. 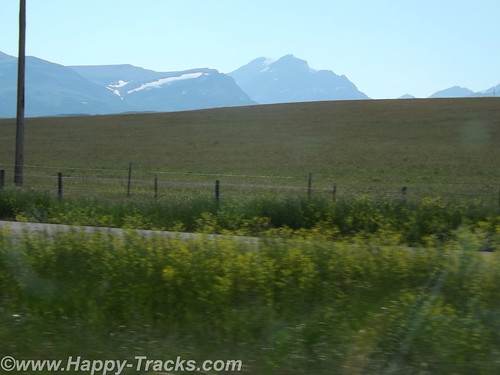 We had set the GPS to take us to Glacier National Park. It led us to Browning on the Reservation where we stopped to figure a more precise destination. While we were checking the paper maps, a man drove up and parked next to us to use the air hose. He had a young girl in the truck with him. It was very hot and the youngster was making her case for getting an ice cream or cold drink inside the store but she was unsuccessful. The man started a conversation with us and recommended that we plan our stop to include a place called Goat Lick Creek where the goats come on a regular frequency. He said that you could often see 40 or more goats with their kids there. We found his spot and a few goats but not in the numbers he had suggested. The goats and other animals frequent this spot to lick the clay and get the minerals. We appreciated his recommendation as it was a place we would have flown right on past with no notice. 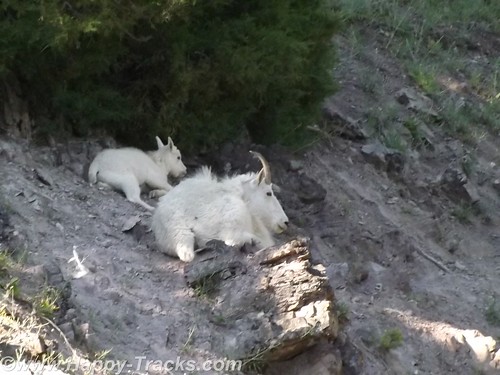 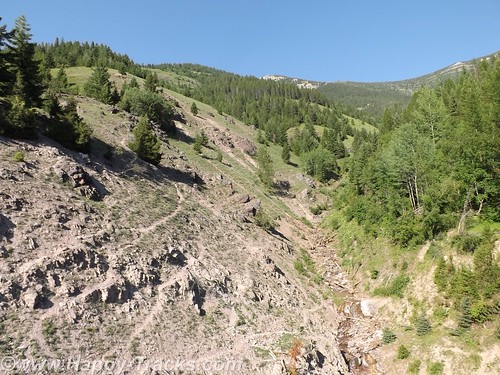 Saturday night summer with no reservations made it a bit difficult to find lodging. We looked first in Whitefish just outside the park’s entrance and eventually ended up in Kalispell about 15 miles away. We searched and eventually found overnight lodging at the Blue and White Motel (I wonder what the story behind that name might be?) where we were told they had two rooms available, one in the “old” building and one in the court. The “new” building probably dated back to the 1960s while the furnishings dated back to the early 1980s. We checked out both rooms and decided to take the one in the court. The carpet was old (as were the stains on it) but it seemed to be a bit better than the other choice. Supply and demand works, I guess. While the motel and the rooms would be prime candidates for refreshing, the place was filled to capacity. The desk clerk was a very pleasant woman with hair a shade of red that nature never used and a pleasant manner that showed she had been around since innkeepers tried to make their guests feel welcome instead of just being processed efficiently. The other guests were a mix of families with children, motorcyclists checking boxes on a bucket list and some longer-term residents who were probably working or going to school. As has become customary, they also had a breakfast bar of sorts that included toast and some prepacked pastries and coffee. Little bit different. 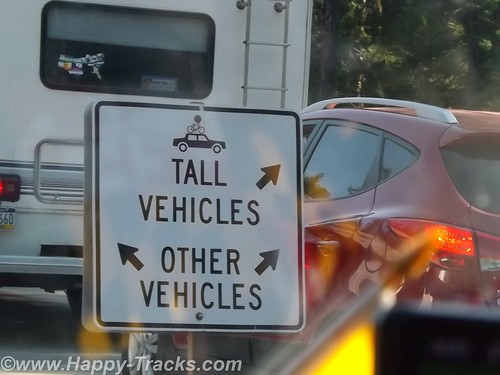 Glacier National Park is believed to have contained approximately 150 different glaciers in the mid-19th century and currently has 25 active glaciers. Current estimates say the last of the glaciers may be gone in the next decade.
We left Kalispell and went to the park. Our first stop was at the Apgar Visitors Center for an orientation. It was a busy place with tour groups forming up and leaving, groups coming in, one of the rangers preparing to give an informational talk involving a bear skin that she had put on display. 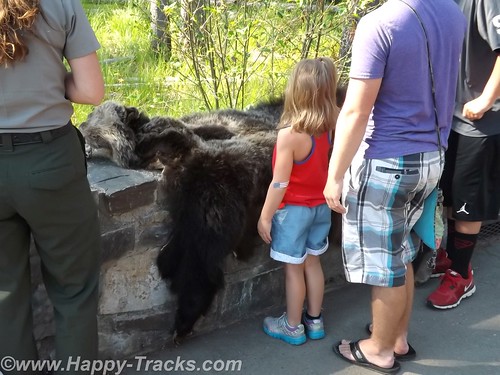 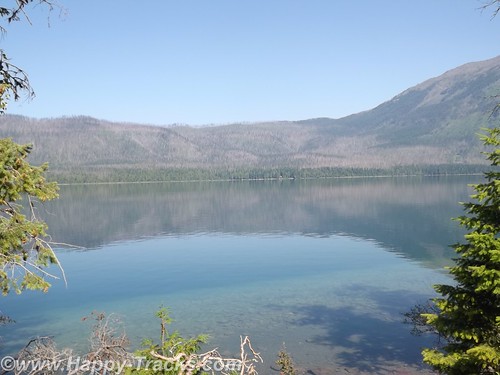 Although the park literature indicated many different animals to be seen in the park, our travels kept us primarily along the more trafficked roadway so we didn’t see many wild animals.
At our first stop just past the winter gate we were approached by another tourist (his accent was Asian perhaps?) seeking assistance. He was driving a rental car and had his paper map in hand but couldn’t locate himself on it. He really just wanted someone to orient him on his paper map. Where is the “You are here” dot? We got him oriented and on his way and had a chuckle at how its sometimes the simple things that make all the difference.
We stopped along the way for pictures of the lake and the glacial stream 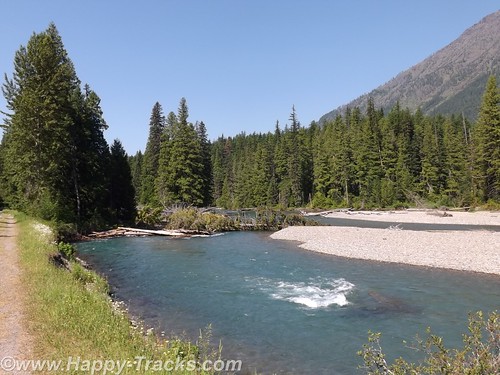 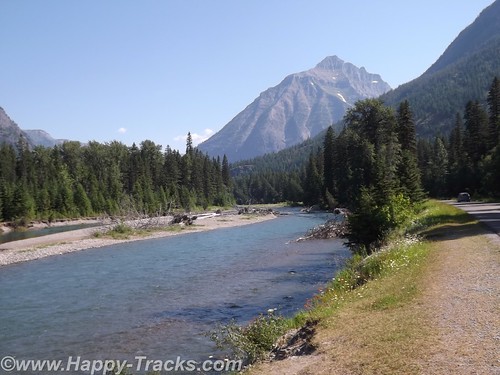 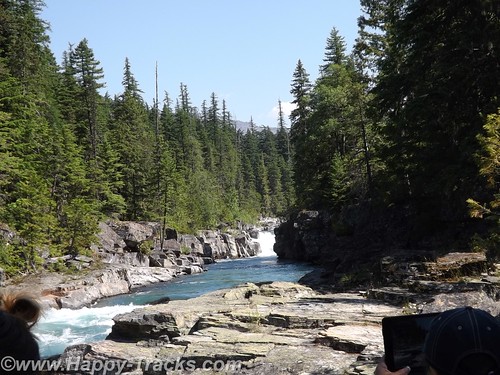 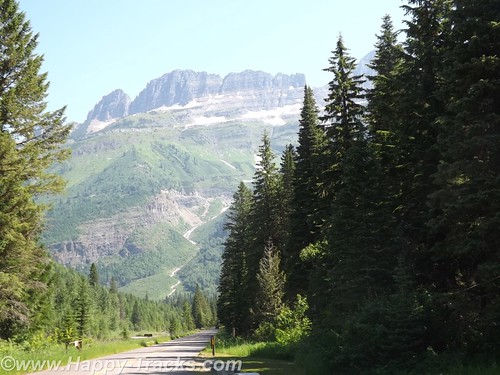 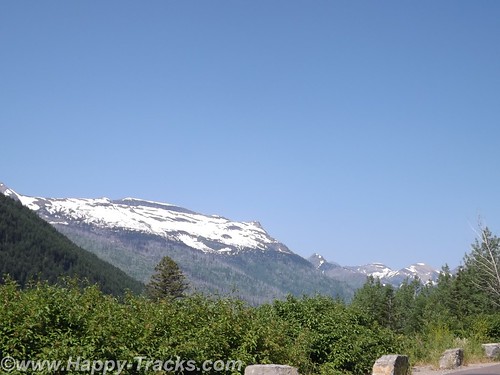 As the sides of the valley got steeper in our ascent, we passed through a couple of unusual tunnels in that the sides toward the valley had large openings to permit seeing the view. 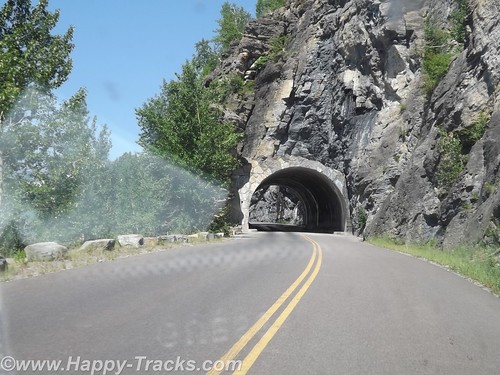 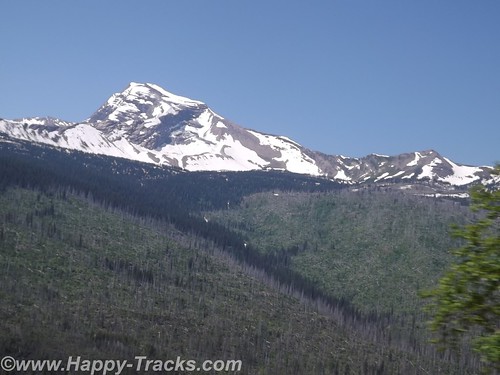 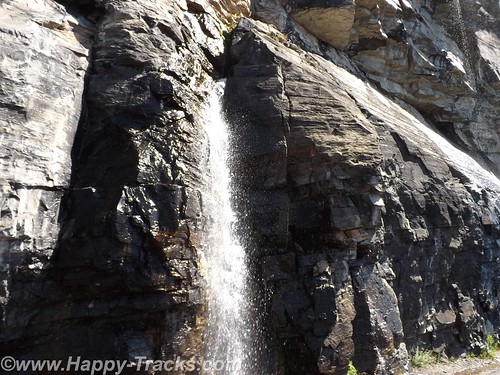 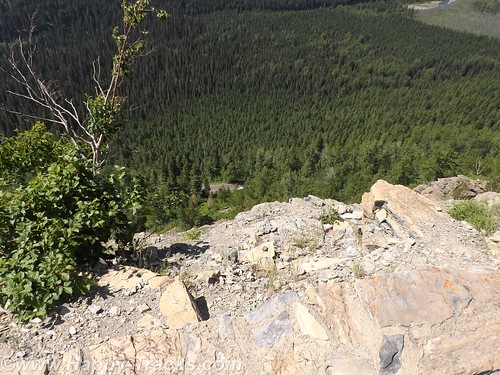 Going to the Sun Road does not allow vehicles longer than 21 feet or wider than 8 feet and does not allow towed vehicles due to the sharp curves/switchbacks and narrow roadways. In the picture above, the white dot in the very center of the picture is a van passing where we had just been. 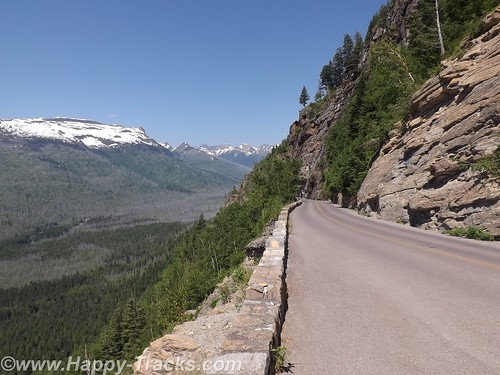 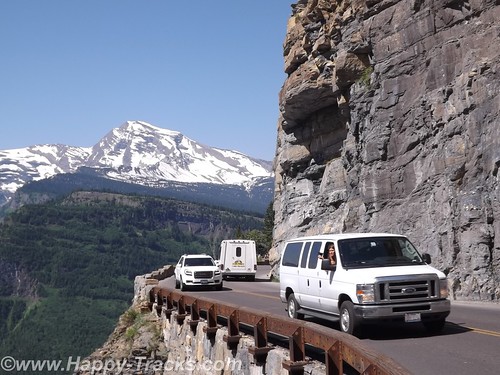 Our first encounter up close with snow and ice. The temperatures had us comfortable in our shorts and T-shirts. 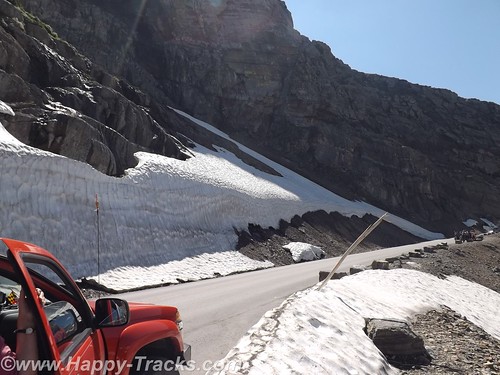 The road winds its way up to Logan Pass, the Continental Divide. 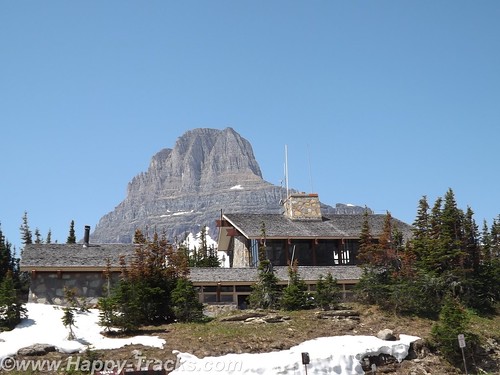 This trip was Betty’s first time crossing the Divide (in Yellowstone) although we would eventually cross at least 8 times before returning to Maryland. We posed for pictures by the sign and talked to two ladies there doing the same. 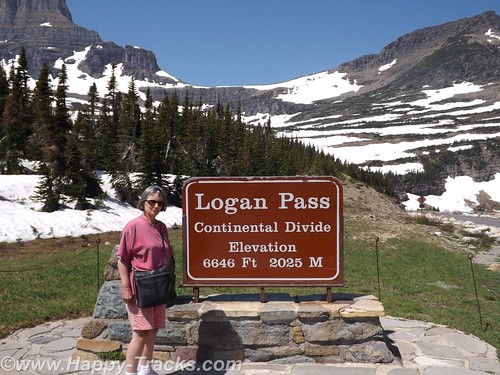 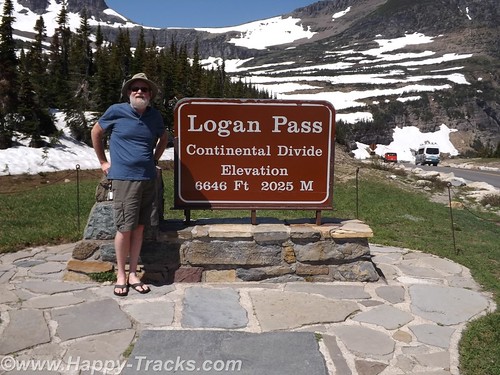 As we were walking away, the two ladies asked us to help identify the “white dots” on the hillside above us which turned out to be the only bighorn sheep we saw on the trip. 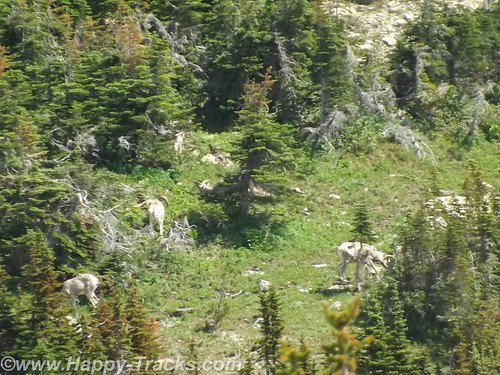 There is a rest area at Logan Pass which was fairly busy this day. There is a gift shop, restrooms and exhibits there but no restaurant and we were looking for lunch. We did have some food in the truck in the refrigerator so we had cheese sticks and crackers for a light lunch. 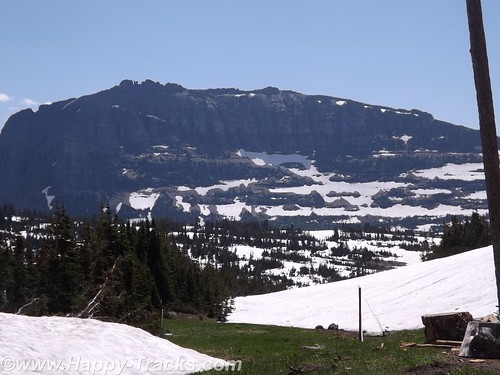 Shortly after leaving Logan Pass, we came upon some more road construction which narrowed us to one lane of dirt road and the accompanying delays which let us appreciate the scenery. The road passed beside Saint Mary Lake which is smaller than Lake McDonald. 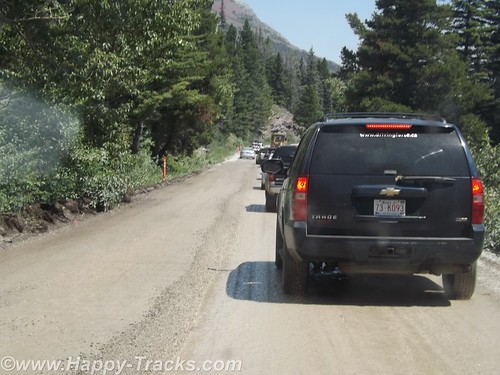 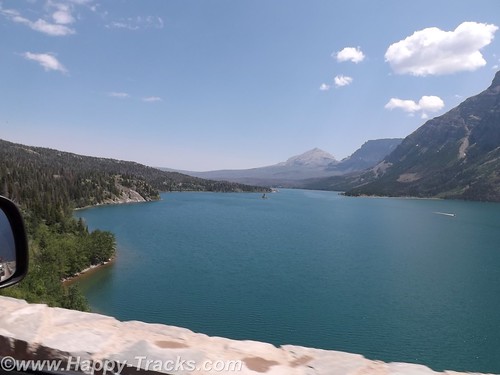 We stopped at the St. Mary Visitor Center for a late lunch. Several of the menu items included huckleberries but we had more traditional fare.
After our late lunch, we exited the park and turned north for the short ride into Canada. 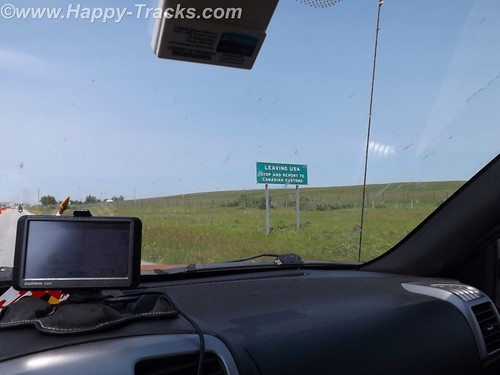 Our first border crossing was at Carway. Usual questions about where we going, what we were going to do and what we were bringing with us. We had bear spray (which apparently is sometimes viewed as a weapon but was of no concern to the Customs Agent) and more than the permitted 200 (one carton) of cigarettes each but this also was not viewed as an issue so we were waved on through. 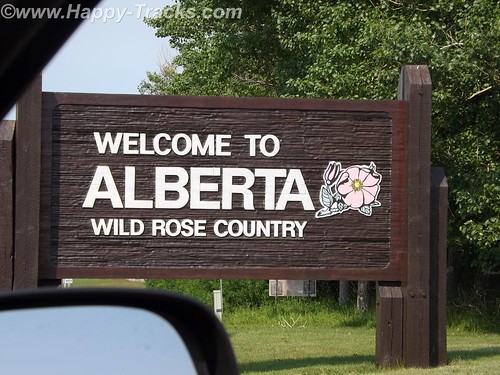 We found a room at a fairly new Comfort Inn in Lethbridge and went next door to a sports bar for munchies for dinner.
The next day, we would visit the TD Bank for Canadian cash continue on our way north.
You can see all of the pictures from this leg of the trip here.
We invite you to continue along with us and hope you enjoy the account!