This day’s travel plans included trekking from Custer SD to Cody WY, our gateway to Yellowstone National Park. We were taking a non-direct route that would allow us to visit Devils Tower, America’s first national monument, created by President Theodore Roosevelt under the Antiquities Act in 1906. Devils Tower is also a sacred area for several of the Plains Tribes. 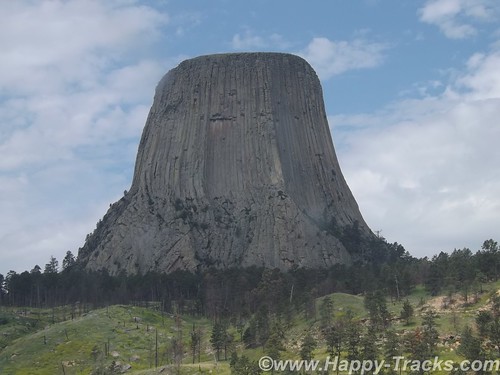 After breakfast and fuel, we hit the road. Route 16 took us through the Black Hills National Forest where the road quickly switched from pavement to dirt and gravel. Very shortly we encountered a stop for construction. Several times we stopped as there was only enough room for one lane of traffic. The pace allowed us to view the scenery and we weren’t in any particular hurry. 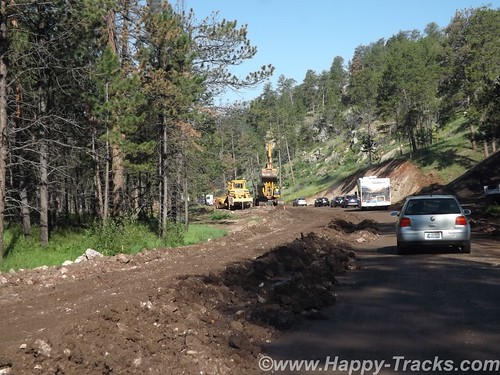 As we neared the National Forest boundary, the construction ended and the road switched back to pavement. Soon after, we crossed the state line into Wyoming and began our approach to Devils Tower. 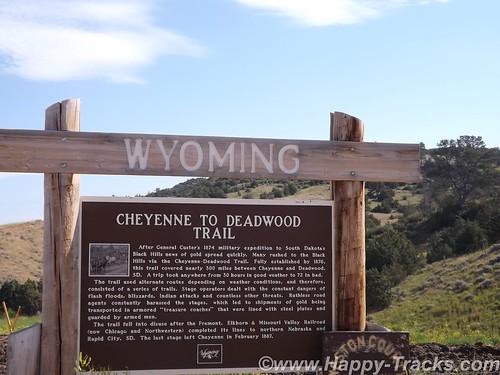 Devils Tower is a column of magma that likely never reached the surface and was later exposed by erosion. The Plains Tribes have varying stories in their lore as to the origins of the tower but they share that that column saved children from being eaten by a giant bear-like creature and that the columns are the results of the bear’s attempts to climb the column. 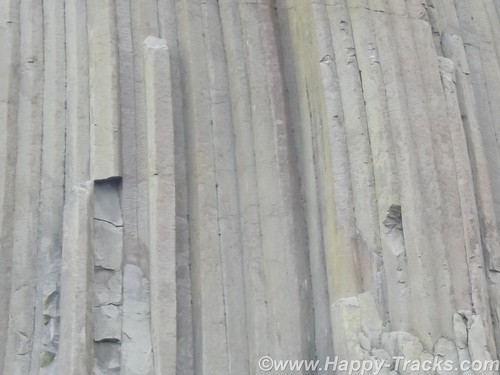 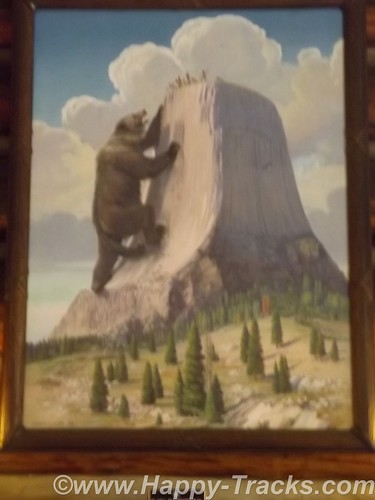 Devils Tower, which attracts about 400,000 tourists a year, is loaded with sacred meaning for about two dozen affiliated tribes of the northern Great Plains. According to their oral tradition, this is the place — historically known to many Indians as Bear’s Lodge/House/Tipi — where a sacred woman, White Buffalo Calf Woman, delivered the sacred bundle to the Lakota, Nakota, and Dakota nations (the three major Sioux subcultures or dialects). This is the place where White Buffalo Calf Woman taught the people how to perform the seven sacred ceremonies (prayer rituals). This is where White Buffalo Calf Woman taught the people how to live in a good way. She also gave them a sacred pipe, and before she left, she promised to return. And then she turned into a white buffalo.

We did see evidence of the sacred beliefs in the form of prayer ribbons and cloths at various places around the base. 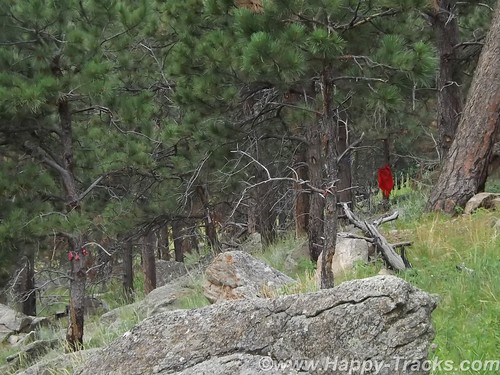 A walk around the base follows a paved path (1.3 miles in length). Wildlife sightings are common — including rattlesnakes– but we didn’t see any during our walk.

The column is a favored spot for climbers (permits required) and you can see –through an NPS telescope– some of the climbing anchor points up near the top.
A sculpture was added near the picnic area adjacent to the campgrounds for the Tower’s centennial celebration. The sculpture is called Circle of Sacred Smoke, made by Junkyo Muto. The sculpture is one of seven “peace” sculptures to be donated internationally and calls to mind the sacred pipe. 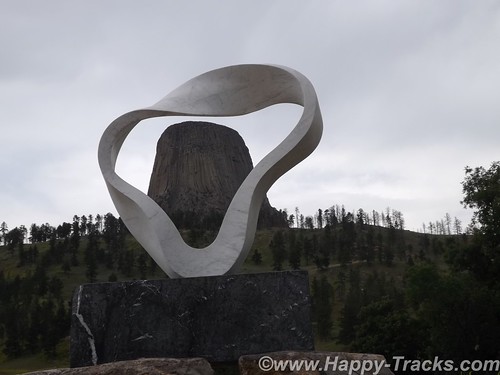 After a walk around the column and a visit to the visitors center and gift shop, we headed out for our next destination and had lunch just outside the monument’s gate.
We got back onto I90 and headed to Sheridan where we exited and headed west through the Bighorn National Forest. A rapid increase in elevation as we climbed into and over the Bighorn Mountains via a series of switchbacks. 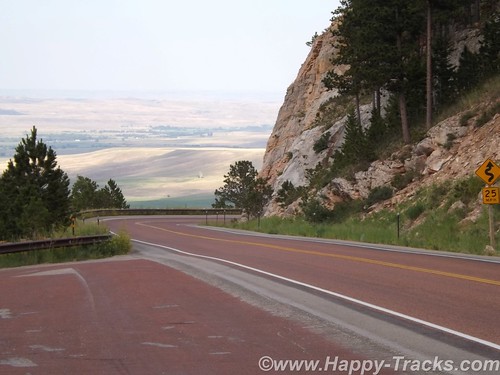 As we started down the far side, we stopped at Shell Falls. The Falls have a parking area and a series of viewing platforms. Interpretive signs explain that the water path that carries water from Shell Falls into the Gulf of Mexico. The stream follows a fault line until the water eventually reaches the Yellowstone River. 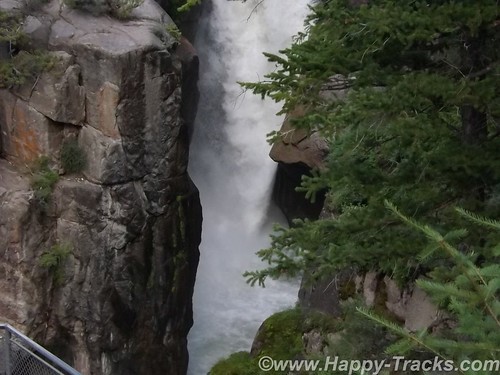 The road travels through the landscape and a series of small settlements and towns until you eventually reach Cody.
As with most of our trip, we arrived in Cody with no definite plans on where to stay. There is a Comfort Inn, a Holiday Inn and Buffalo Bill’s cabins on the main route. We stopped at the Comfort Inn. Although there were rooms available, the price was (considerably) higher than our budget allowed. As we balked, the desk clerk advised that there were lesser priced cabins available elsewhere but she was not able to give us details. She offered to call someone who could tell us though. Shortly, another lady appeared outside the hotel on a golf cart and offered to show us the Buffalo Bill’s cabins (which were available at about 2/3 the price). What have we got to lose? We followed along.
She took us to adjoining property and showed us a lovely little cabin which had furnishings equivalent to the Comfort Inn. We told her we’d take it and she gave us a ride to the office where we registered. On our ride, she told us she lived in her large RV just on the other side of that fence and came up to Wyoming every summer to work here. She and her husband wintered in Florida somewhere. 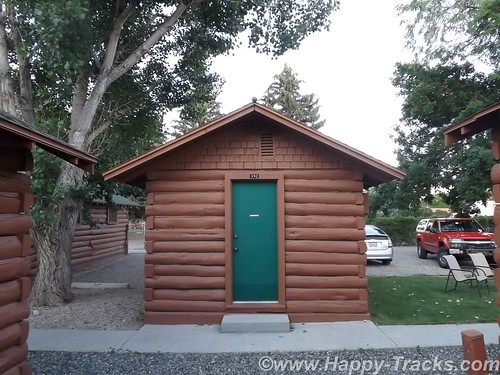 On the bed in the cabin was stuffed bison toy. A clever piece of marketing, the bison was available for sale in the gift shop or could be left. So the family walks in, the kids see the bison and immediately go to it. “Mom! Dad! I want to keep this.” I wonder how many they sell this way? 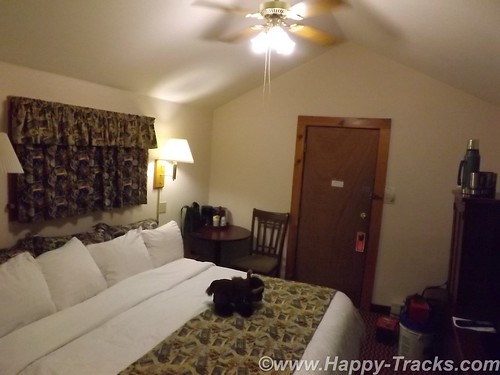 Our night in Cody was our first night after letting the bucket washer system work on our clothes. We decided that fewer clothes at a time would work better along with less detergent. We switched to a schedule of one set of outerwear and two sets of underthings and socks with less detergent.
Comfortable bed, good air conditioning and nice chairs to sit in on the lawn. A good night’s sleep to send us on our way.
You can see all of the pictures from this leg of the trip here.
We invite you to continue along with us and hope you enjoy the account!