We left Medora and headed east on I-94 towards the Missouri River and Bismarck. We called a couple of hotels but found no rooms available without a reservation. Someone recommended the Prairie Knights Resort. Since it was about 50 miles off the highway, we called ahead to check on room availability. They told us they had plenty of rooms so there was no need to make a reservation. Mmmmmkay? 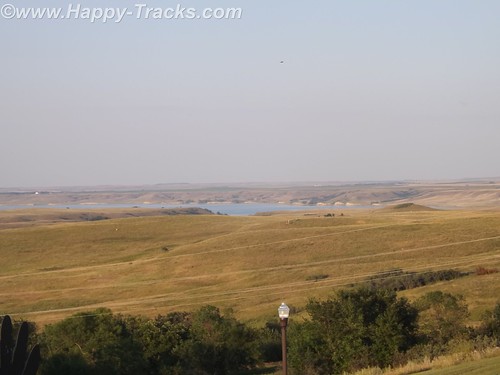 We drove south with the Missouri River to our left through a couple of very small settlements and passed the Ft. Lincoln State Park entrance. It really is 50 miles and there is virtually nothing until you reach the Prairie Knights Casino and Resort. Prairie Knights is a casino and lodge located on the Standing Rock Indian Reservation. It is operated by the Standing Rock Indian Tribe. The casino offers high stakes gaming options, along with 725 slot machines, blackjack, craps, among other games. The lodge portion of the casino consists of 200 guest rooms. 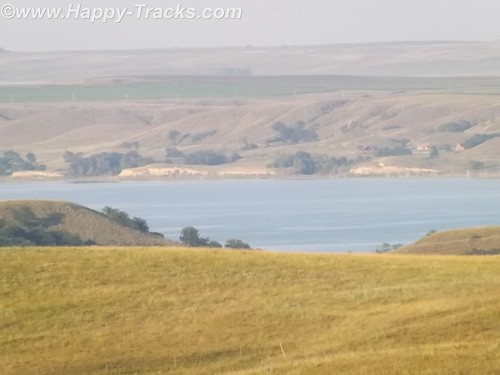 Once we finally get there, we see that they have a landing on the River, the lodge, a restaurant (buffet style), the casino and a small gas station with prices comparable to what we’d seen in Bismarck. 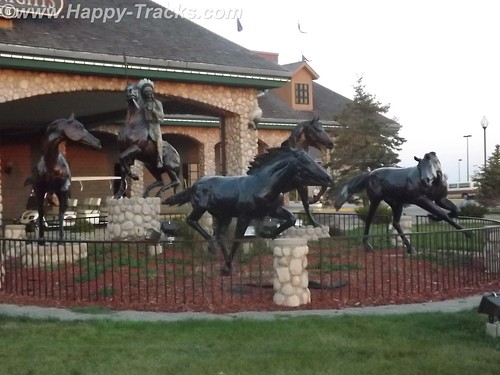 When we go to check in, the clerk asked if we were members of the Prairie Club. Uh, no. Before we get registered, they suggest we go into the casino and register. The registration is free but it knocks $25 off our room rate and gives us $10 to spend in the casino. We are now Prairie club members! We walk around a bit, get some dinner at the buffet and call it a night. 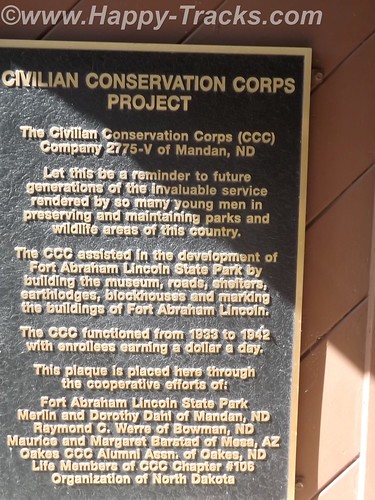 The next morning we head back north towards Mandan and the Ft. Lincoln State Park. Although we didn’t use them, it should be noted that the park has primitive and developed campgrounds and rental cabins near the riverbank. We didn’t go to those areas of the park to check them out. There are also hiking and biking trails.
The visitor center building contains a display that includes exhibits from the Lewis and Clark expedition and from the Mandan Indians who had a village there. 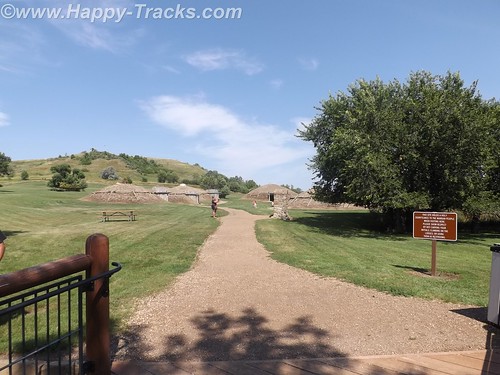 This is where the tour starts for the On-A-Slant Mandan Indian Village. Parts of the village have been the subject of archaeological research and some restoration. Their society was matriarchal with families dwelling in the same lodge including daughters and sons-in-law. The lodge would pass to the eldest daughter on the death of her mother.
The lodges were circular with a fire pit in the center, venting through a hole in the roof which could be covered in hides in times of bad weather. The lodges were also built into the earth with dirt and grass on the outside and over the roof which provided insulation from the temperature extremes. The guide told us of the lodges maintaining 60 degrees even in the coldest parts of winter and they were cool on this hot day when we visited. Generally, the lodge was entered from the side with a partition wall separating the entrance from the main room for weather and defenses. Sleeping pads were around the circumference. 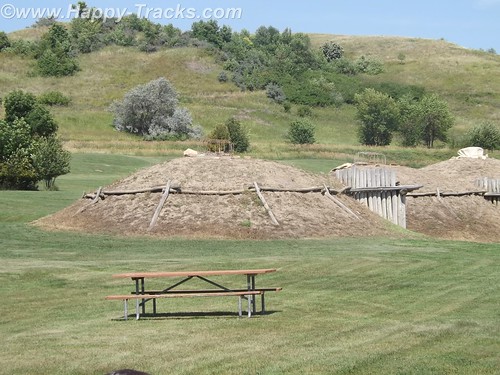 The Mandans were stationary people with language similar to the Sioux. They grew crops and hunted animals while trading with the nomadic tribes. A typical Mandan village consisted of 12 to 100 of these dome-shaped lodges. Their oral traditions indicated they had once occupied the eastern North America.
Their villages were often stockaded for protection and they hosted many of the European explorers, including the Lewis and Clark Expedition and Prussian scientist Prince Maximillian.
In 1750 there were nine large Mandan villages, but recurrent epidemics of smallpox, pertussis (whooping cough), and other diseases introduced through colonization reduced the tribe to two villages by 1800. In 1837 another smallpox epidemic left only 100 to 150 Mandan survivors. Some of these accompanied the Hidatsa to a new settlement near Fort Berthold (northwest of Bismarck) in 1845; others followed later, as did members of the Arikara tribe. The Mandan, Hidatsa, and Arikara eventually became known as the Three Affiliated Tribes (also called the MHA Nation).
In the mid-20th century, the Three Affiliated Tribes lost a considerable portion of their reservation to the waters of Lake Sakakawea, which rose behind the newly built Garrison Dam. With the flooding of the river bottoms, on which had been the best agricultural land, many tribal members shifted from agriculture to ranching or off-reservation pursuits. 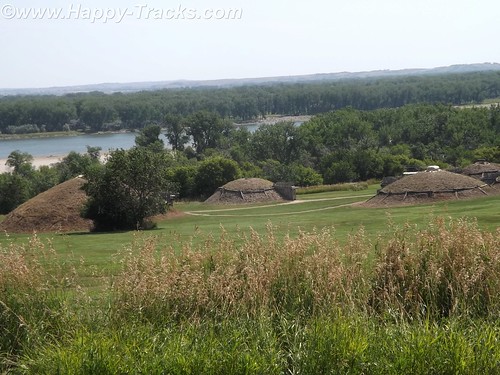 In the 1870s, at the same location where the Mandan tribe had established their village, a military post was built in June 1872 by two companies of the 6th U.S. Infantry under Lt. Col. Daniel Huston, Jr., as Fort McKeen, opposite Bismarck, Dakota Territory. 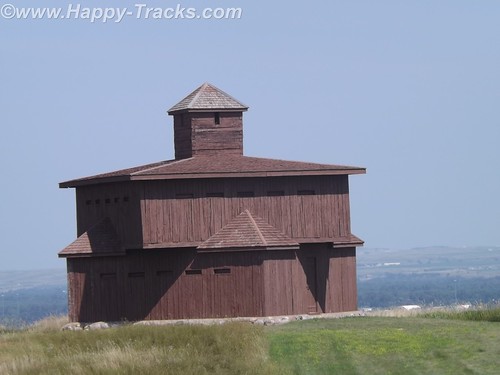 Standing today are two of the watchtowers that overlooked the juncture of the Heart and Missouri Rivers and the town of Bismarck. 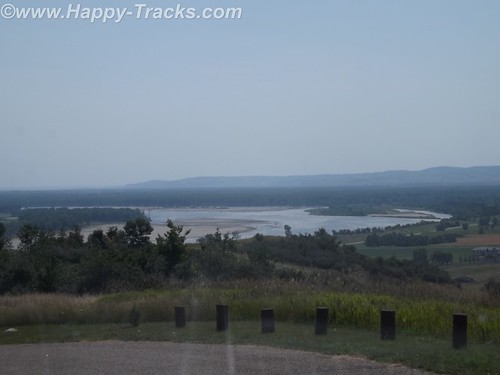 The three-company infantry post’s name was changed to Fort Abraham Lincoln on November 19, 1872, and expanded to the south to include a cavalry post accommodating six companies. Among the 78 permanent wooden structures at Fort Lincoln were a post office, telegraph office, barracks for nine companies, seven officer’s quarters, six cavalry stables, a guardhouse, granary, quartermaster storehouse, bakery, hospital, laundress quarters, and log scouts’ quarters. Water was supplied to the fort by hauling it from Missouri River in wagons, while wood was supplied by contract.
By 1873, the 7th Cavalry moved into the fort to ensure the expansion of the Northern Pacific Railway. The first post commander of the expanded fort was Lieutenant Colonel George A. Custer, who held the position until his death in 1876. 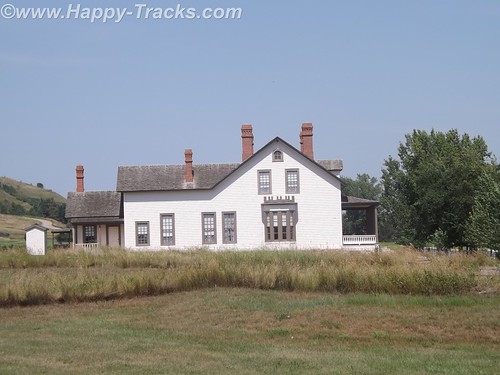 Several buildings remain at the post, including Custer’s restored (and furnished) house, the commissary (now the souvenir shop) and some stable and storage buildings. 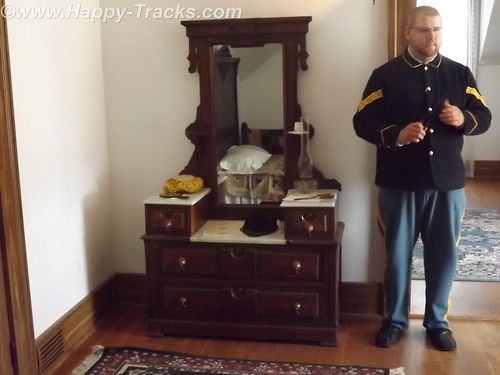 Custer’s house is open to guided tours. The tour is conducted by a man in period uniform in the role of one of Custer’s aides. The tour is alternately conducted by a woman who was in period dress. The setting is 1875 so the tour does not address the Colonel’s demise at Little Big Horn. Guests are shown through the house as arriving guests for a party to be given that evening by Colonel and “Mrs. Colonel” Custer. 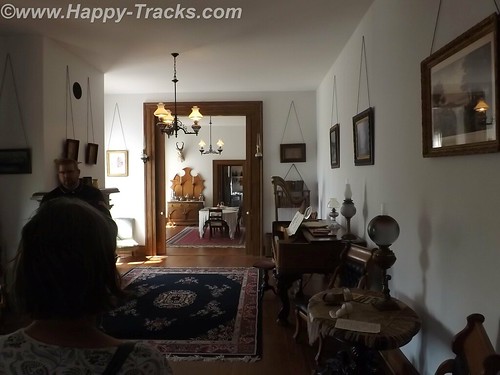 The tour includes a discussion of some additions to the original house that were ordered by Col. Custer following fire damage as well as some entertainments provided to help make the rugged outpost more pleasant for Mrs. Colonel Custer. 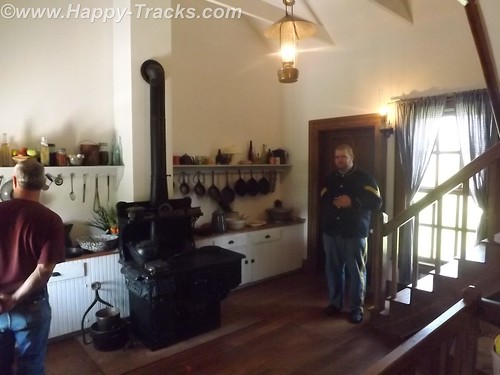 One point on the tour is the cellar where the Colonel’s pet wildcat was kept. We also toured the billiards room upstairs which served as something of an officer’s club. 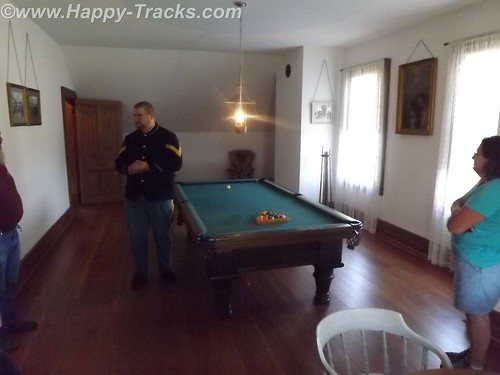 As we returned from our visit to 1875, it was time to load up the truck and continue east to our next night in Fargo, ND. Our knowledge of Fargo was initially limited to the movie starring William H Macy which was somewhat gruesome. We were somewhat disappointed to find that the movie seemed to occupy a large part of the tourist industry with Woodchippers being the local drink at the bar and directions to go take pictures at the chipper in all the tourist literature. Fargo is the largest city in North Dakota at just over 113,000 people. Opposite Fargo and across the Red River of the North is Moorhead, Minnesota. The Fargo area is growing with much construction along both sides of the interstate with much of it devoted to housing, hotels and support of the petroleum industry. Some of the news stories and features of the area talk of the shortage of housing and the boom being fueled by petroleum.
After breakfast the next morning, we made tracks across Minnesota finally stopping in Hudson, Wisconsin just across Lake St. Croix from Minneapolis-St. Paul. 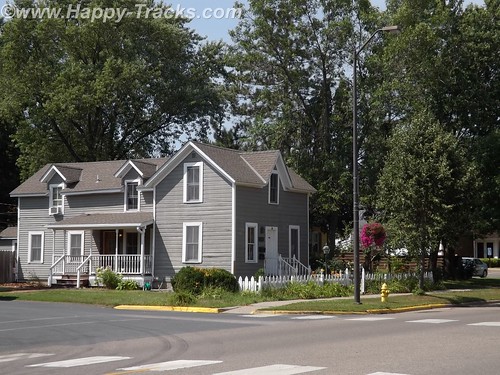 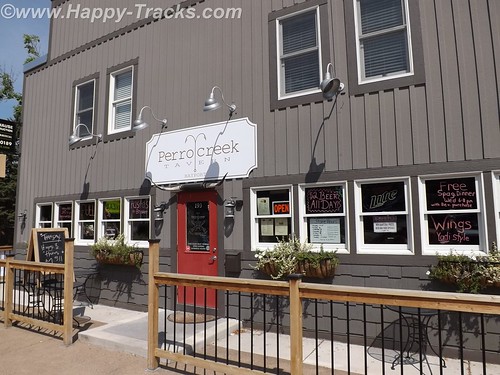 Hudson appears to be a small touristy town which is also a distant bedroom suburb of the twin cities. Our late lunch was in a small (but very friendly) pub style bar where we also called my nephew to see about meeting up with him as we passed near his home north of Chicago. We drove late that night, finally stopping in Loves Park, Illinois for the night. 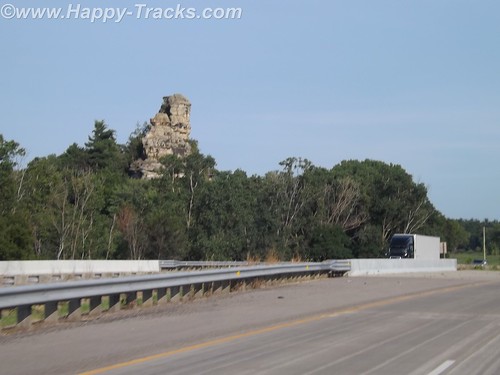 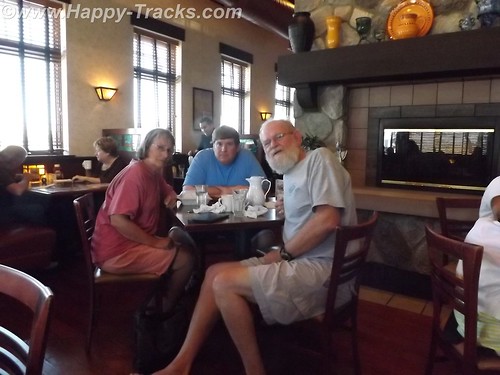 We did connect with my nephew (whom I hadn’t seen in over 10 years) and met him for breakfast but didn’t get the opportunity to see his family due to other commitments and the short notice we had given them. Our visit was short but it was good to see him.

We continued on and spent the night in Maumee, Ohio.
You can see all of the pictures from this leg of the trip here.
We invite you to continue along with us and hope you enjoy the account!
Don’t forget the trip calendar we put together at CafePress. We think it turned out pretty well and would make a great holiday gift.