Butte, Montana is a city of about 35,000 these days and is the fifth largest city in Montana. Its history revolves around the mining industry and was a boomtown during the early 20th century with all the stages of development from camp, to boomtown and mature city. It shifted to a town of historic preservation and environmental cleanup. Butte is unlike other mining towns in that the mining operations are woven within the fabric of the city itself. 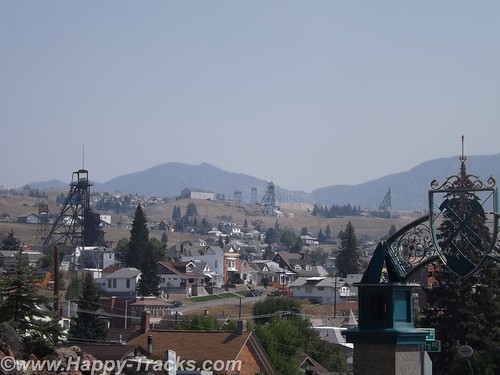 We arrived from Missoula and stopped on the west side of town for fuel. We knew we wanted to see the Mining Museum so we spun the GPS roulette wheel and decided to take a ride by to see if they were still open. I call it the GPS roulette wheel because sometimes the route the GPS gives may not be that workable. In this particular case, it routed us via Bluebird Trail, or the back way, into the World Museum of Mining. A bluebird could follow the trail easily but it was a bit rugged for us, just a dirt road with deep ruts that wandered up and down a few low hills past some unused equipment and a dog that seemed interested in chasing the interlopers away. 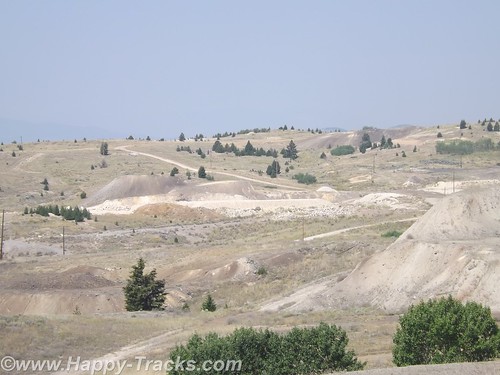 The road had cross ruts and was among the worst roads of the entire trip. It did lead us up to the paved parking lot of the World Museum of Mining’s paved parking lot (which was closed for the day) and onto the city streets of the Montana Tech of the University of Montana campus and thus into downtown Butte. 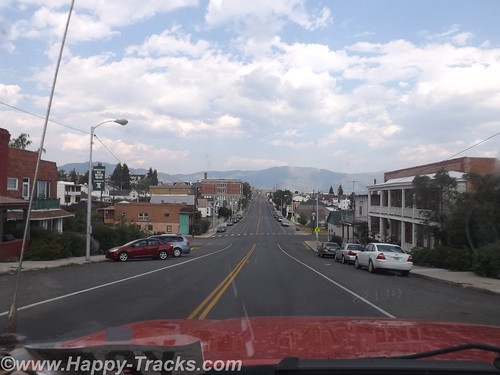 We found and checked into our motel for the night. As we had seen in several other places, some of our fellow guests were motorcyclists which made for an interesting show the next morning as we sat eating the complimentary breakfast. They were loading up and carrying a fair amount of luggage with them. Each piece had a particular place and set of tie-downs leading to an interesting game of 3D Tetris as they loaded up. One of our fellow diners was also taken by the show and remarked how she used to ride a scooter to the market and had her own adventures tying down a watermelon. She also shared that she was a widow who had learned the value of duct tape for a myriad of uses after her husband’s passing. 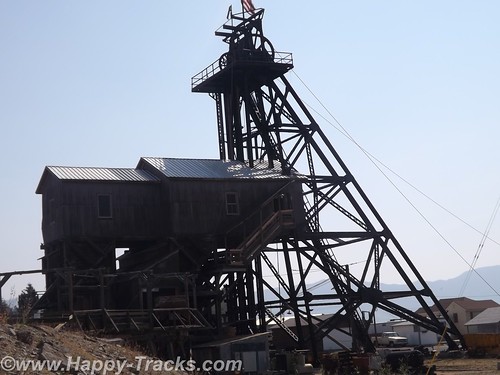 We left and headed back to the World Museum of Mining (using the smoother paved way through town).
The World Museum of Mining was established in 1963 and one of the few in the world built on the top of an actual mineyard, the Orphan Girl Mine. The Orphan Girl operated from 1875 to 1956, an exceptionally long time for any mine to operate and speaks to the richness of the ore there. Over the course of its life, the Orphan Girl was a copper/zinc/gold/silver mine and very profitable for Anaconda Copper Mining Company and providing employment for its workers and supporting the Butte economy.
The World Museum of Mining is open daily from April to October and gives underground tours of the mine, also something of a rarity. The Hell Roarin’ Gulch town located on the property is composed of actual buildings from the boomtown days and authentic memorabilia. The town can be toured on your own or with a guide. 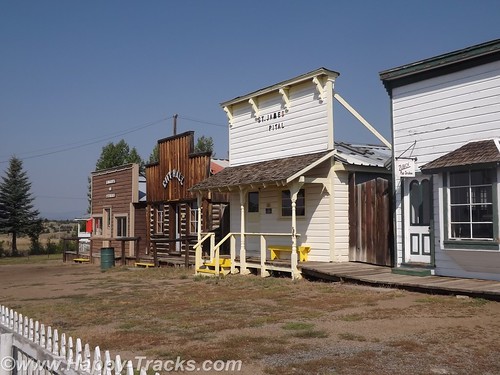 The website, HauntedHouses.com, lists the World Museum and Hell Roarin’ Gulch as sites of sightings of visitors from the past who haven’t crossed over. (We did see some international tourists but none that we determined to be paranormal.) It is believed that some buildings moved from other sites or displays from other locations may have attachments that came with the physical building or object.
The Museum exhibits include geology and mineral exhibits in addition to furnishings of the day. 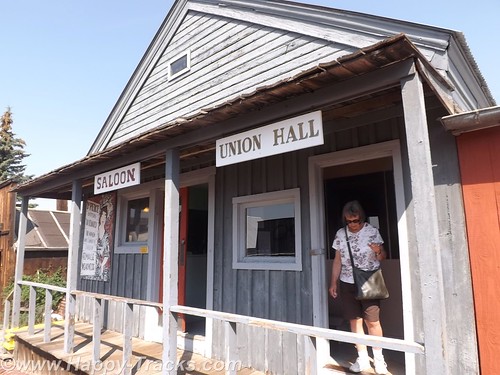 Hell Roarin’ Gulch buildings continue to be restored with the Orphan Girl head frame being restored in 2006. There are currently 15 buildings and include a couple of churches, a school, post office, various stores and professional offices. 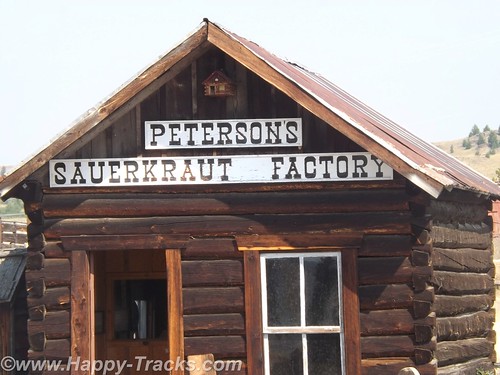 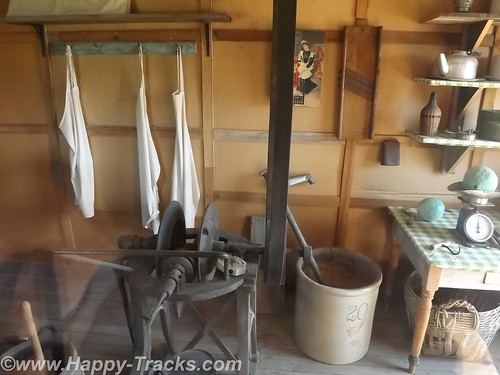 One of the buildings is Peterson’s Sauerkraut Factory. The operation used steam operated equipment to cut and core the cabbage and then it was moved by hand into barrels for aging. Peterson with his brother and their wives operated the factory for 50 years beginning in 1883 and produced over 350 barrels of sauerkraut per year at 400 pounds per barrel which he delivered throughout the area. 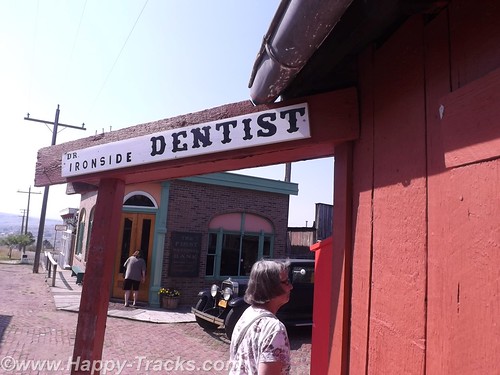 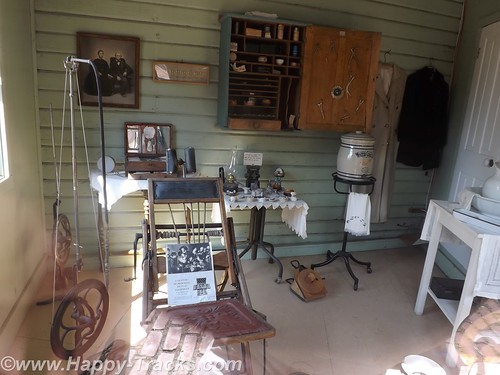 Doc Ironsides, the dentist, was a traveler and would set up in different towns or at different mines. Some of his equipment was on display in the office. The foot operated drill seems barbaric, to say the least. 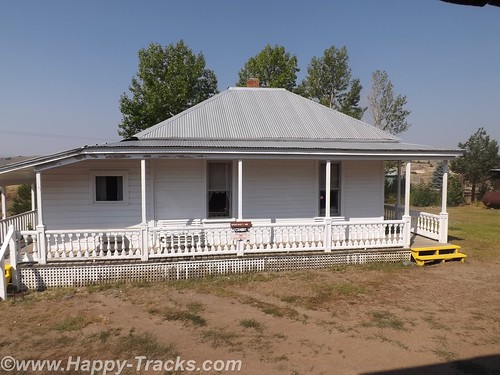 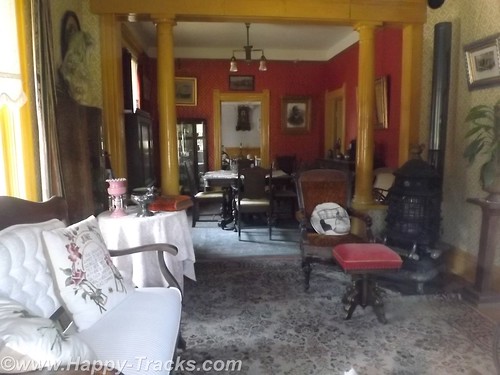 The largest and fanciest building was the mine superintendent’s home. 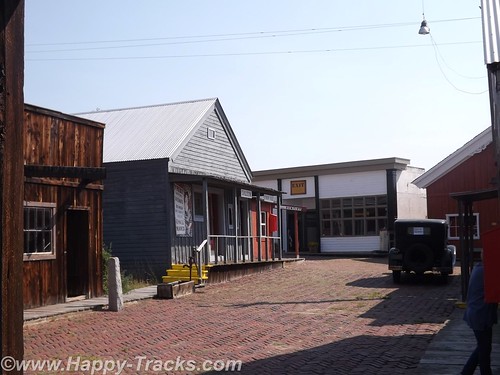 We left the World Museum of Mining through the campus and returned to the downtown area to the Copper King Mansion built for and by William Andrews Clark beginning in 1884. Construction was completed in 1888. 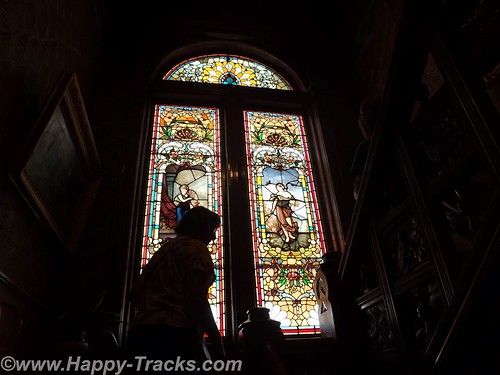 Mr. Clark was born in Connellsville, Pennsylvania in 1839. He worked his father’s farm until he was 14 and then went away to school, attending law school in Iowa. He taught school in Missouri in 1859 and 1860. In 1861, he joined the Army of the Confederacy but deserted in 1862 to pursue mining. With a couple of successful claims, he decided he would do better providing support to the miners and took advantage of the laws of supply and demand to increase his fortunes. He bought a team of horses and a wagon and sold supplies to the miners and later began making loans based on the potential value of mining claims. At one time, his income was reported at $17 Million per month! 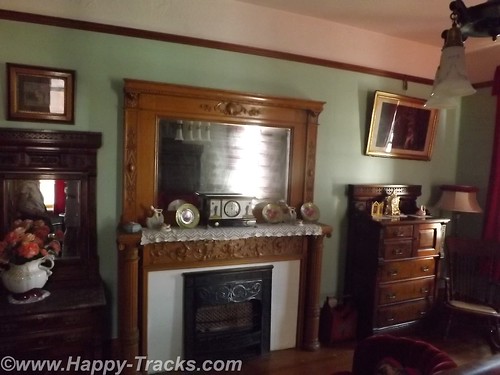 Clark was rich enough that he built (and financed) his own railroad. His business interests stretched east to New Jersey. He pursued his interest in politics, and served as President of Montana’s two constitutional conventions. He served in the US Senate from 1901 to 1907.
Perhaps his greatest legacy to Butte was that he built the beloved Columbia Gardens, a 68-acre playground and amusement park for the young at heart of Butte and the region. Thursdays were set aside to transport children for free to the Columbia Gardens on his electric trolley system. Other charitable efforts of Clark include a Girl Scout camp in New York state named for his daughter Andree. He also funded the Paul Clark Home, an orphanage in Butte that provided sanctuary for the sick and the indigent, and the YWCA home in Los Angeles for homeless girls and their mothers.
After his death, Columbia Gardens operated until 1973 did not pass to the people of the town as some said Clark had indicated it would. The Anaconda Mining Company wanted to rid itself of the maintenance burden (as the park was deteriorating) and to mine the land. While the matter of ownership and intent was tied up in bureaucracy and lawyers, fire struck and the Columbia Gardens was destroyed.
It should also be noted that Mr. Clark was instrumental in the founding of Las Vegas, selling off 2000 acres as lots and making a significant fortune in the process. He is the Clark for whom Clark County Nevada is named. Following his stint as US Senator, Mr. Clark moved to New York City until his death in 1925.
One unique feature of the mansion is a custom made shower that sprays water from around a complete circle and the top. The guide told us that it had some issues with keeping an even temperature from all the spray heads but that it worked as designed. 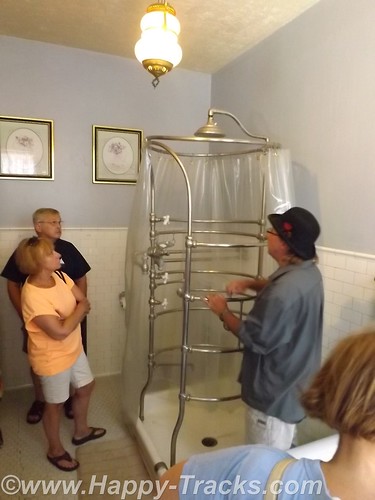 On the top floor is a ballroom for entertaining, complete with a pipe organ. Unfortunately, Mr. Clark’s design was ahead of its time. Playing the organ generated such a loud sound that it literally knocked over furniture in the room and was only played once!

After Clark and his second wife passed on, the mansion was inherited by Clark’s son. The mansion was sold to an outside person, who sold all the existing furniture that was in the mansion. After becoming this owner’s private residence, the mansion was eventually sold to the Catholic Church and it became a home for the town’s Catholic nuns, who turned part of the top floor into a chapel, in the rooms off the ballroom area. The nuns didn’t appreciate the fresco which was painted on the ceiling of the master bedroom, so they painted over it. The mansion was put back on the market when the nuns moved out some years later, and stood vacant for 3 years.
The new owners started at once to clean out the cob-webs and dust, and began to renovate the mansion to its former glory. While the owners were able to buy back some of the original antiques owned by the Clark family, many other antiques similar to the ones which existed in that era were purchased. 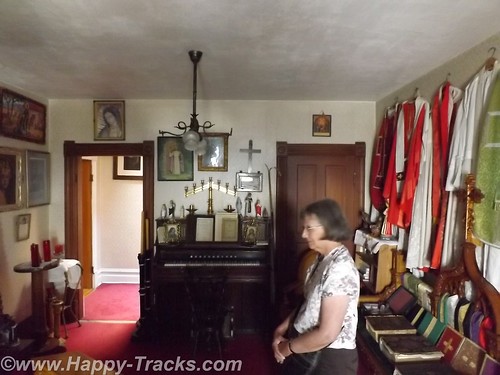 In an effort to preserve the history of Butte as well as restore the mansion, the new owner collected pieces from church buildings being destroyed and developed a collection of stained glass as well as church vestments and furniture which occupies another room on the top floor. 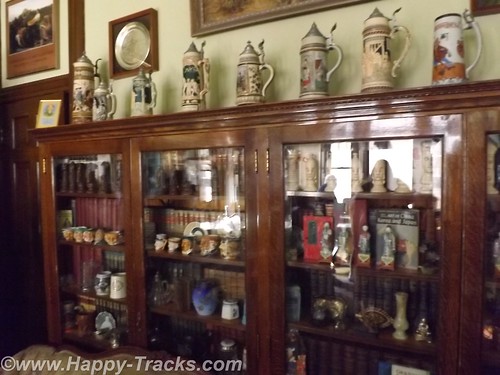 Also the owner loved to have collections, which today are still here on display, including dolls, hats, toys, clocks, demitasse cups and steins. 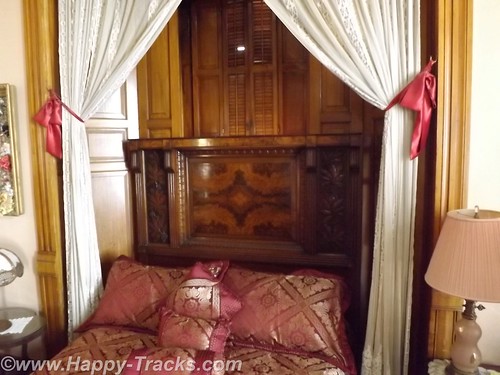 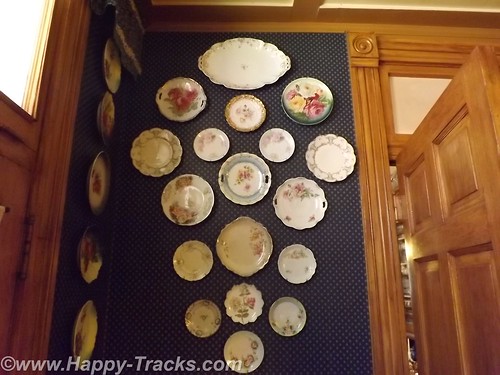 To raise some money, this owner opened up a restaurant in the main dining room which she ran for many years. The mansion has stayed in the family since then. 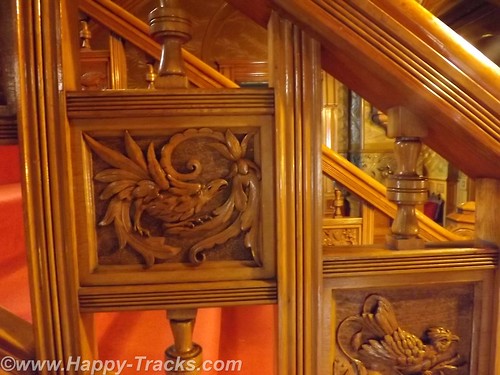 The staircase includes these wooden carvings representing each of the states (at the time) in flora and fauna.
The Copper King Mansion operates today as a B&B and also gives tours to visitors. Much of the tour is devoted to the restoration of the mansion. 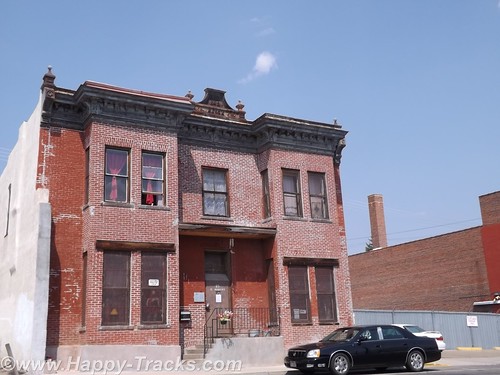 After the Copper King Mansion, our next stop was the Historic Dumas Brothel. It operated as a brothel from 1890 to 1982 for the purpose of catering to the predominantly male population associated with the mining industry. At one time, it had hidden alleyways and tunnels to permit rapid egress in the event of a police raid.
The brothel boasts 42 rooms ranging from barebones to opulent. Its current ownership saved it from tax sale in 2012 and is attempting to save and restore it. They finance this effort in part by giving tours and operating a store. We dropped by with the intent of seeing the tour but were turned away as the tour guide hadn’t come in that day and the backup was out the door on the way to his other job. We just got a glimpse of the outside and the front rooms and had to leave. It strikes me that the only car parked in the area other than ours was a black Cadillac. There’s a bit more info and some photos at http://www.thedumasbrothel.com
In a dramatic shift of focus, we also saw the statue “Our Lady of the Rockies”, a 90 foot statue erected in honor of mothers everywhere. The statue sets atop the Continental Divide at an elevation of 8500 feet, which is 3500 feet above Butte. 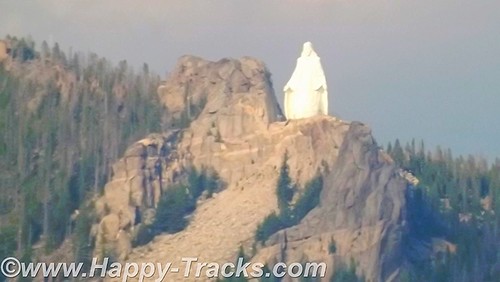 The statue’s genesis was in a promise made by Bob O’Bill who promised to erect a statue of the Virgin Mary if his wife recovered from cancer. His wife did recover and the project grew with input from others. The statue is lit by night and a bus tour goes from the town to the statue twice per day during the summer. There is also talk of a tram to ride to the top but expansion plans for access have been challenged by property owners in the area with concerns about the potential traffic.
We didn’t ride up close but we did get a chance to see the statue from below.
There are many more pictures from the World Museum of Mining and the Copper King Mansion here.
We invite you to continue along with us and hope you enjoy the account!
Don’t forget the trip calendar we put together at CafePress. We think it turned out pretty well and would make a great holiday gift.