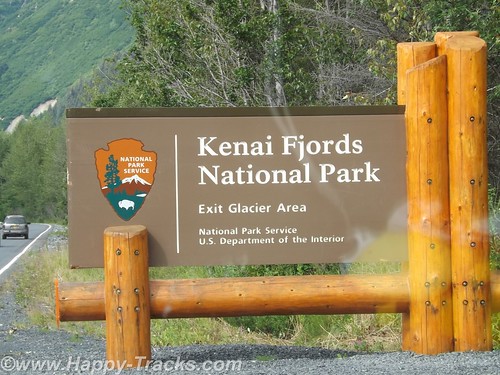 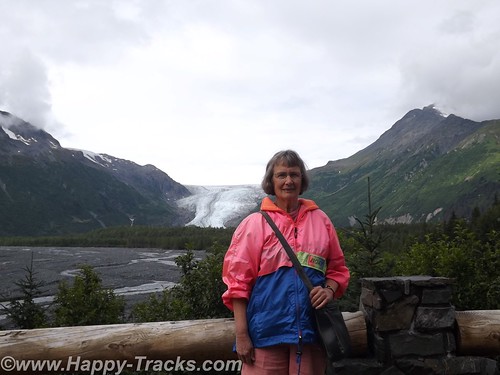 To access the Exit Glacier, we drove along a spur road off the Seward Highway for about 2 miles to the visitor center and a parking lot. There was a pulloff along the way which offered a view of the foot of the glacier and the stream flowing from there towards Resurrection Bay. Along this road were several tour guides both for the glacier and for kayak and other nature tours.
In the pulloff (posted with no camping signs), one visitor had a popup tent camper setup and appeared to be taking pictures perhaps for an advertisement or story layout of some sort.
On the drive in, we passed signs marking the recession of the glacier as this current ice age plays out. The Ranger Station area includes a parking area including space for RV and bus parking which also took the overflow from the car parking area. It was a sunny and warm Saturday so there were many cars in the lot. The building includes some interpretive displays as well as a small shopping area along with the ever-present warning to beware of the bears and not to feed the wildlife. Ranger tours are available every couple of hours as well as a mid-day presentation at the visitor center.
We opted to walk on our own. Parts of the trail are ADA accessible. The accessible parts are relatively flat (and paved with asphalt or crushed gravel). That part of the trail goes to the rocky streambed at the foot of the glacier. 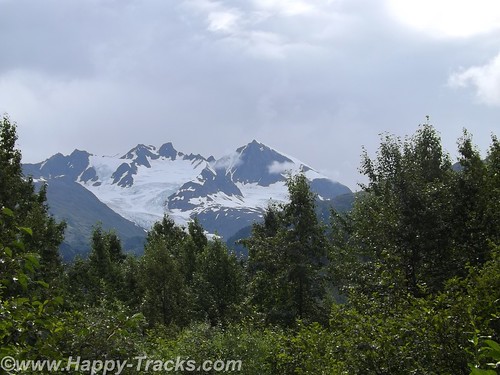 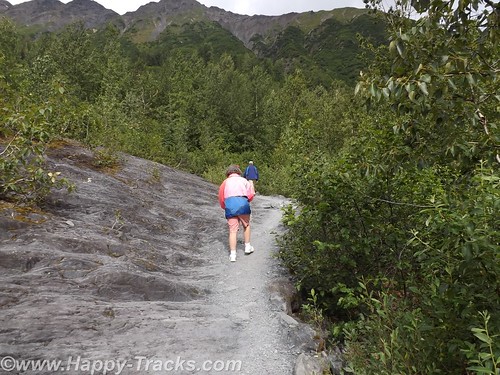 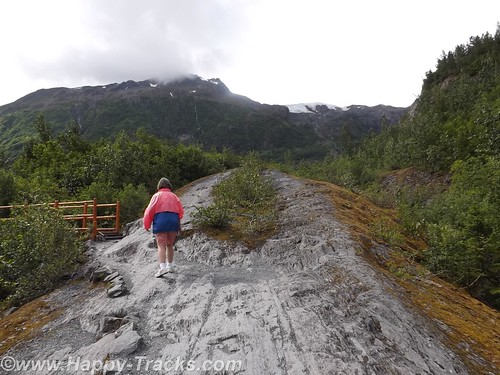 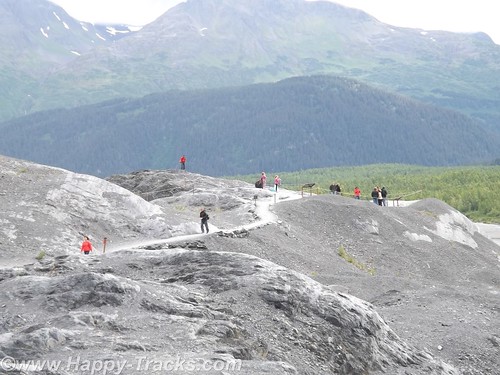 The trail also proceeds upward toward the glacier itself. Fairly easy walk if you’re in good health and there are places to step off and rest if that suits you. In several places the trail narrows so that you have to alternate for folks going up and down. There were a number of families on the trail from kid strollers to folks older than us. A bit more than halfway up the hill is a marker for where the edge of the glacier was in 1998. A half mile or more behind us was the marker for the 1980 edge. 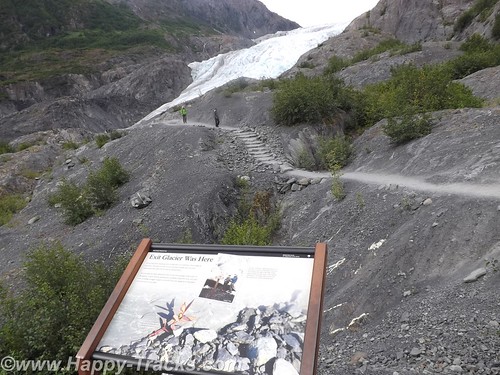 Along the way, you could see the drag marks in the rocks where the glacier had been moving. The rocks showed layers of lighter colored rock formed by mineral-laden steam pushed up from below which solidifies. 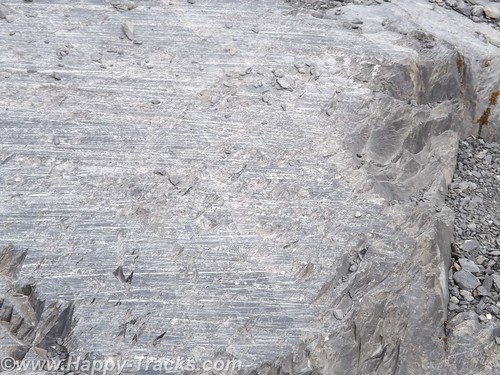 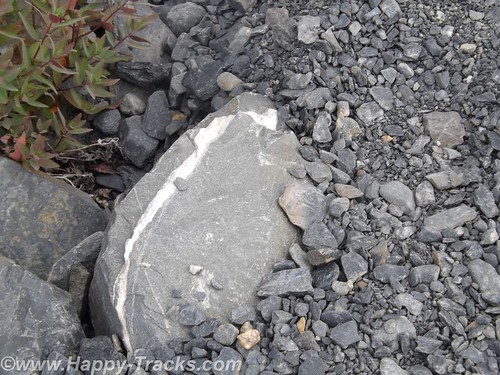 As the glacier recedes, moss and lichens take hold in the rock and slowly break it down to form soil. As the soil increases, smaller plants take root until eventually trees take root in the small crevasses. 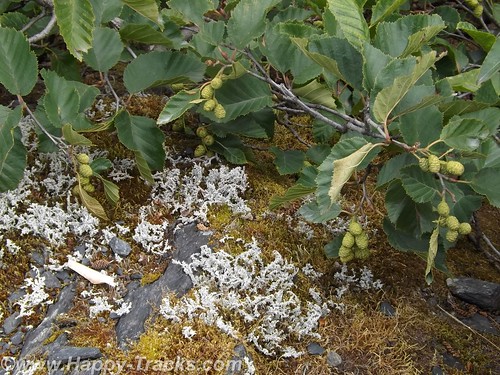 While it was warm and sunny out, as you stood by the glacier you could feel the effects of the breeze blowing across miles of ice. Our light jackets felt good. 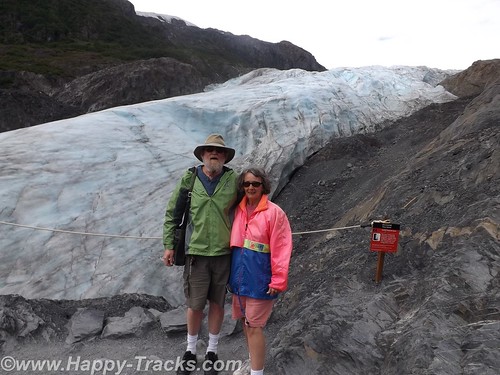 The glacial ice has a blue cast to it. We learned this is because the other colors of light are absorbed by the ice.
We meandered back down the hill and out onto the rocky streambed. The rocks were mainly rounded and varied in size from golfballs to softballs. 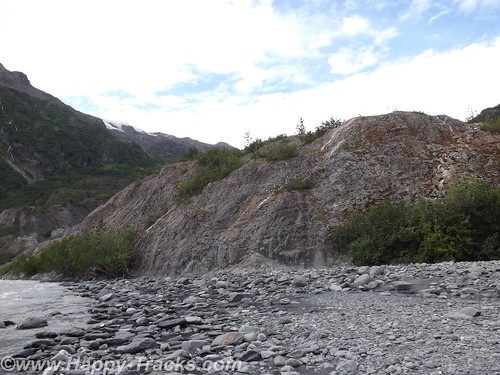 We stopped to look for postcards before making our way back to the truck and started driving north and west across the peninsula to head south.
We re-traced our route for about 30 miles before turning west. We stopped for lunch at another roadhouse that was doing a pretty good business. We sat at the counter and one of our dining companions ordered a beer with her lunch. First the server had to go find someone else to take her order (we don’t know if it was an age or training thing but the Alaskans seem to take alcohol more seriously than some other jurisdictions we’ve visited). Then the different server asked to see ID from the woman. She showed them her drivers license. After the server left, she remarked to us how they always ask for ID even though she told us she was 60. According to her, Alaska will mark your drivers license if you are convicted of DUI. She didn’t know whether that would prevent them from serving or just trigger a request for keys or a designated driver. Interesting. By the way, the burgers were very good.
As we continued on, we passed over a winding river that was full of fisherman even if not full of fish. We passed by the Funny River (another interesting name).
By the time we reached Soldotna, it was time to stretch our legs and grab a coffee. From the main road through town, Soldotna is a typical small crossroads town. Several motels, a couple of small shopping centers and restaurants along the main drive through town. Soldotna is sometimes referred to as red and green city as it boasts the only traffic lights (which create a bit of a jam) we’d seen since we got out of Anchorage! 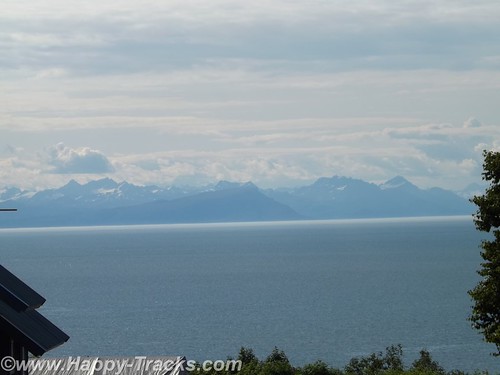 We’re approaching the western side of the peninsula and the highway runs parallel to the shore and along a high bluff. This gives us a great view across Cook Inlet to the line of the Chigmit Mountains, part of the Aleutian Range which stretches into the Aleutian Islands alongside the Bering Sea and northern Pacific Ocean. The view includes the highest point in the Aleutians, Redoubt Volcano (10,197 feet), and Iliamna Volcano (10,016 feet) which are part of the Aleutian trench of the Pacific Ring of Fire volcanoes. 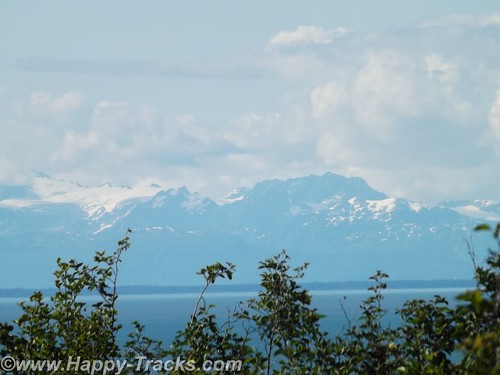 There are a number of B&Bs and vacation homes perched on the bluff with this gorgeous view. Also along the bluff is the The Transfiguration of Our Lord Russian Orthodox Church at Ninilchik. 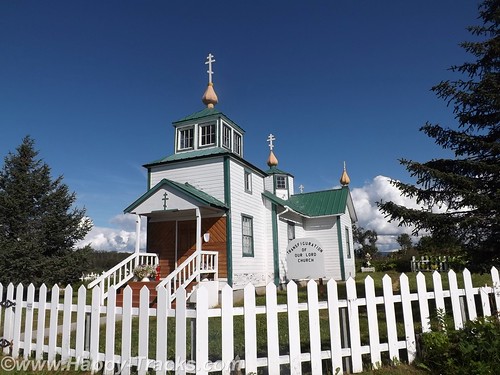 Ninilchik’s original settlers were Russians who migrated from Kodiak Island in 1847 before the sale of Alaska to the USA. Various sources indicate that the settlers chose to stay because it was too much effort to move back to Russia. The culture is still very definitely old Russian. Ninilchik is a popular tourist destination with halibut fishing and clams below the tide line. The Alaskan earthquake of 1964 caused part of the village to drop in elevation. Much of the town is now on the land (east) side of the highway. 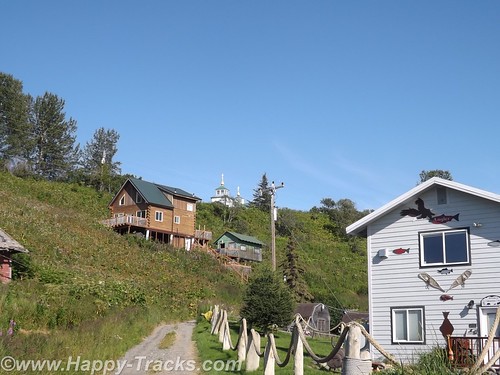 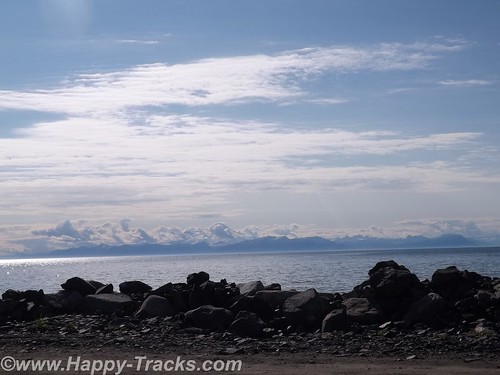 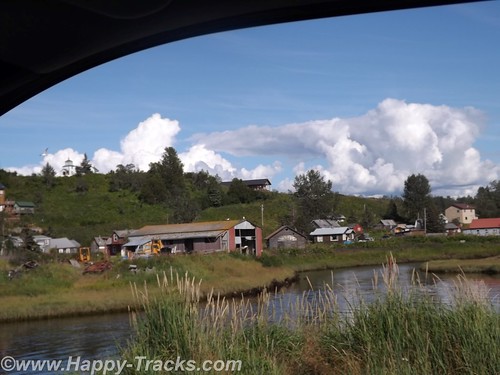 We continued on towards Homer. There is a scenic pulloff before the bluff descends above the town. We sighted a double rainbow and some more great scenery. 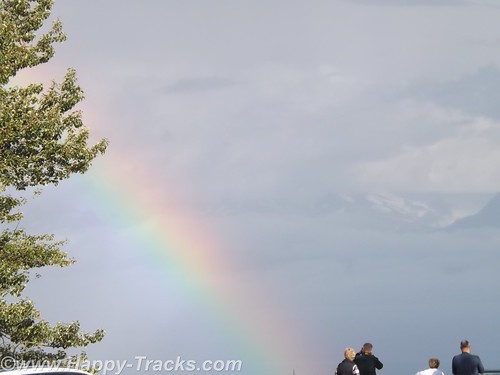 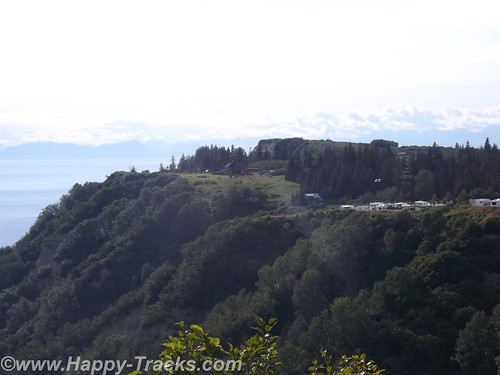 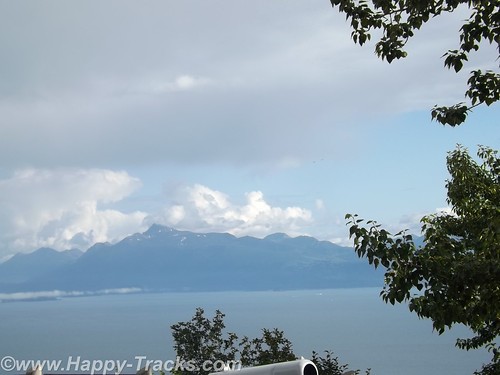 We went into town to secure lodging for the night. This task is easier said than done. We checked the chain motel (all full). We went to the Driftwood Inn which has cabins, RV park and lodge rooms but only the RV park had vacancies. The staff there was VERY, VERY helpful in trying to find us a room even making the calls for us. Apparently the Chamber of Commerce or Visitors Bureau maintains a website with listings of the various lodging which is updated with available rooms. The only place listed as having anything available was a B&B on past town. They called but only got voicemail. They left a message on our behalf and we decided to drive on out so we would be nearer should a room be available. We arrived at the B&B but still no callback. We went to the door but no one answered there either. We finally were able to talk to the innkeepers on the phone but they indicated they had rooms but only rented with a 3 night minimum. They did have a great view but we were off again. 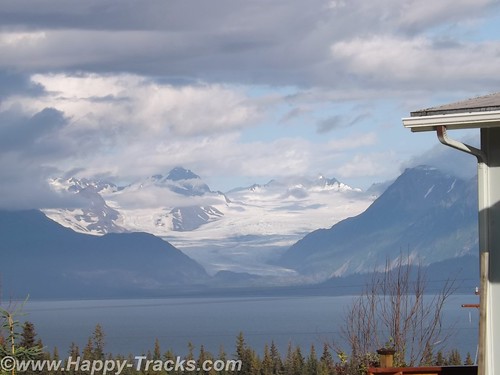 We called down the list the folks at Driftwood gave us and finally got hold of cabins in Anchor Point (about 12 miles back up the road). The woman on the phone said she still had a cabin for one night available. I offered my credit card to hold it but she told us it wasn’t needed. She’d meet us there. OK, I guess. She gave us directions but we took the wrong turn. (Seems there’s two intersections with the highway and North Fork Road.) We called again and she corrected our way. We eventually reached the Sleepy Bear Cabins and got checked in. Sleepy Bear Cabins has 4 cabins and a couple of RV spots. 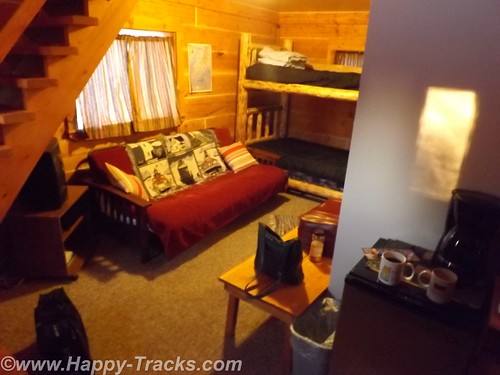 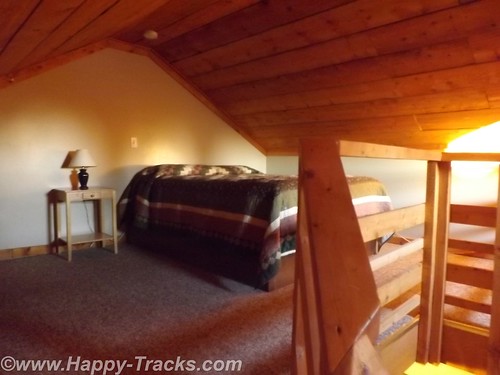 Our cabin would sleep 6 or so people, 2 on the futon downstairs, 2 on the bunkbeds downstairs and 2 in a double bed in the loft. We opted to sleep upstairs but had to remember to duck for the low ceilings and the really low ceiling over the stairs. 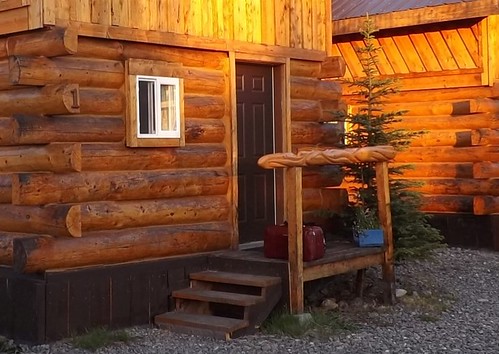 Our cabin was of logs and had some interesting fish carvings in a line for the small stoop rails.
There were no restaurants in the vicinity open so we had sandwiches from the refrigerator in the truck. This was only the second time we had to rely on our own supplies for a meal.
A good night’s sleep and we would try Homer again on Sunday.
You can see all of the pictures from this leg of the trip here.
We invite you to continue along with us and hope you enjoy the account!