We crossed the border at Carway and proceeded to Lethbridge for the night. We still needed to convert US or obtain Canadian cash. That turned out to be relatively painless as we just used our own bank’s ATM card at the TD Bank ABM. We knew we would incur a service charge from one or both banks and that the conversion would be factored into what was removed from the account. Sounds complicated but it really was as simple as the ATM withdrawal at home. For those of us used to US currency, Canadian currency looks strange. It has a window of transparent film where you can see through it. Canadians have also abandoned the use of the penny. All our cash purchases were rounded to the nearest 5 cents. One dollar (loonie) and two dollars (toonie) are coins rather than bills.
If one were to map out a route from Lethbridge to the start of the AlCan Highway, your route would most likely take you to Calgary, then to Edmonton and then northwest along Route 43, a modern highway, to Grand Prairie and then to Dawson Creek and the beginning of the AlCan (generally now called the Alaska Highway). We chose instead to continue north from Edmonton to Athabasca, then west-ish to Grand Prairie because this would more closely follow the 1950s routing of the highway and its approach, as Route 43 didn’t exist.
From Lethbridge north past Edmonton, the highway itself was fairly modern divided 4 lane affair. It was of modern state highway standards generally. The route took us through farmland and around the perimeter of most towns. 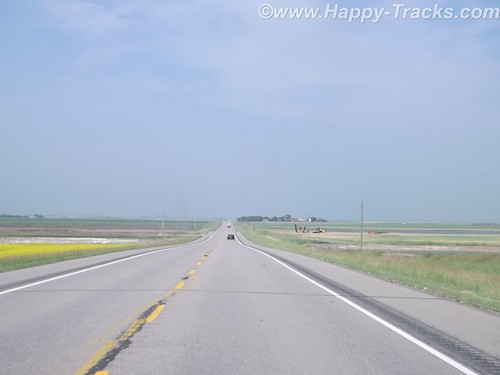 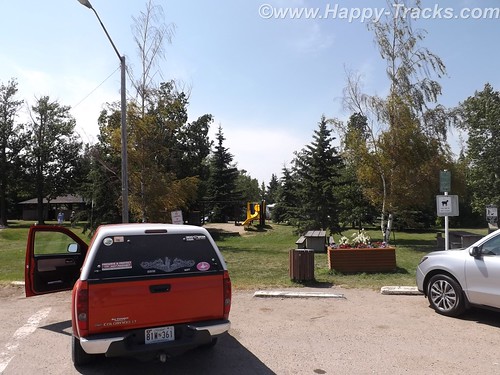 There was the occasional rest area such as this one in Bowden that incorporated the town park, a playground, a picnic area and camping facilities including showers in the restrooms. It was seasonally open and there was a petition to sign to keep the facility open. Apparently budget considerations at the Provincial level had the residents concerned.
We went around the edge of Calgary which appeared to be a modern city from our vantage point with mid- and highrise buildings rising up from the relatively flat prairie. 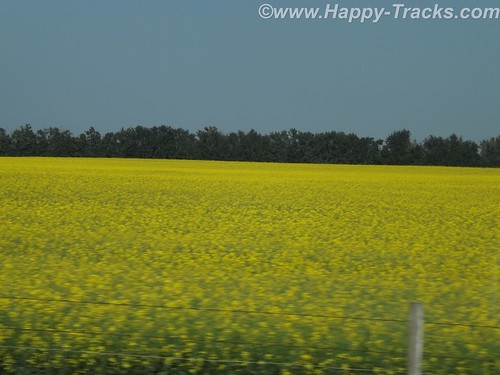 As we passed Edmonton, we passed through city traffic and turned north towards Athabasca. Athabasca is a small (population <3000 in 2011) town whose importance dates back to the days of the fur trade when it was known as Athabasca Landing and marked one end of the Athabasca-Edmonton trail which connected the waters of Athabasca River (flows north) and the North Saskatchewan River which flowed into Hudson's Bay. 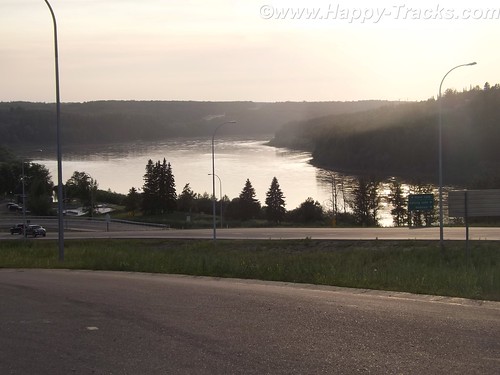 It lies along Highway 2 which connected the AlCan to points east. Eventually it was to be a railroad stop but the reality had it as a terminus where trains pulled in from the east and then pulled back out to the east. Trains to Athabasca had locomotives on both ends as there was no roundhouse or other turnaround point. Eventually the railroad stopped running to Athabasca and its economy was ruled by its crossroads location and tourism for the river. 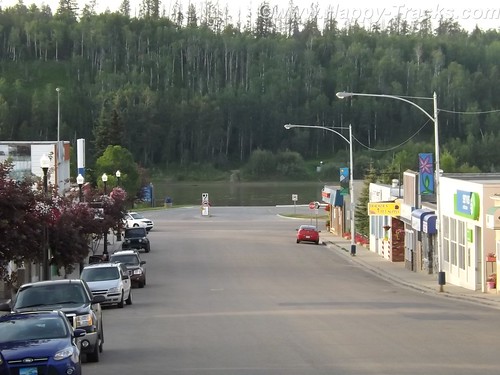 Today its economy still depends on tourism but the proximity to the Athabasca tar sands oil fields are driving an economic boom. On the edge of town sit two new and chain hotels, a Super 8 and a Comfort Inn whose business is in providing lodging for the workers supporting the oil operations. The oil industry is probably also responsible for a resurgence of the tourism and the restoration of the old train station as a tourist center. We couldn’t find figures for the size of the transient/temporary population. 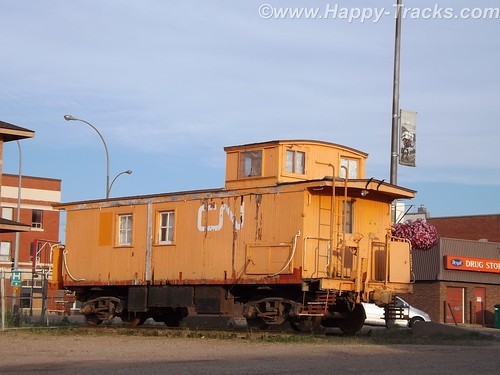 The Super 8 (while new and 3 stories tall) has adjacent construction which appears to be an expansion. The desk clerk was a younger blonde woman with an accent. In conversation, she revealed she was from Ecuador and that her brother worked in the Embassy in Washington DC so she was familiar with our home territory.
The economic boom has also fed other salaries as well. The local A&W had a Help Wanted sign advertising a starting salary of $14/hour.
The town grid may be large but the developed streets are numbered 47 through 57. As we came to see in many of the small (and larger) towns, flowers were in profuse bloom along the streets and hanging from the lamp posts. 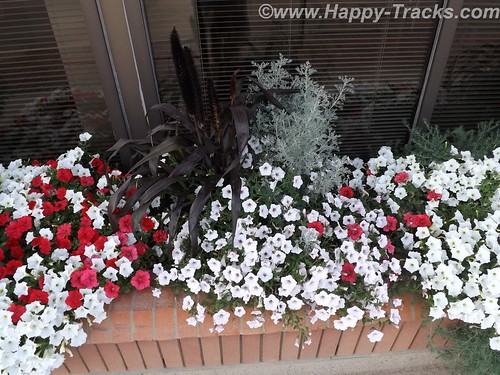 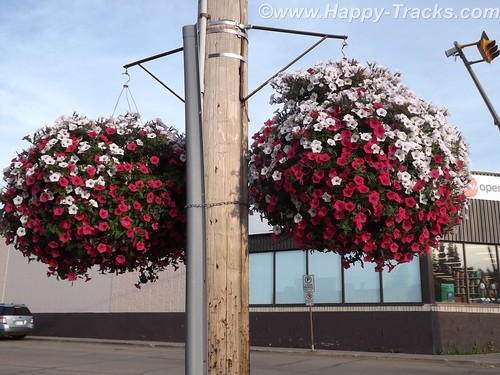 We ate at the 49th Street Restaurant which had Greek food, seafood and more generic fare (quite tasty and reasonably priced). There were probably three other tables in use while we were there, one by what appeared and sounded to be Asian businessmen, possibly related to the oil exploration. 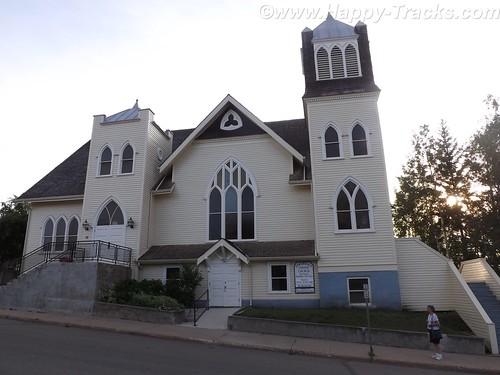 Across the street was the Athabasca United Church of Canada, a traditionally older church. We also found the Ukranian Orthodox Church of St. Peter and St. Paul. We were surprised at the density of churches (at least 10 in town) for its population. 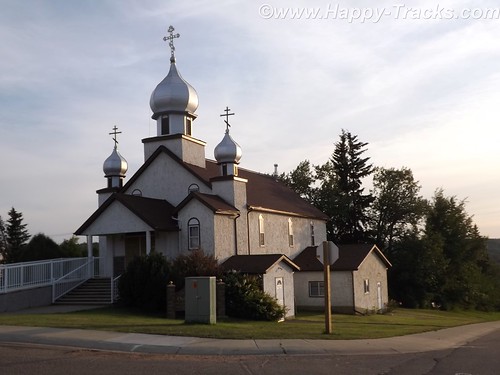 Over the course of our trip, we would send out 37 postcards to our daughter, not counting other recipients. You do remember postcards, don’t you? So we set about to find appropriate stamps and a card. In a town this small, the post office should be easy, right? It was smack dab in the center of town. But our GPS labeled it as being on the opposite side of the street in either an empty lot or the boarded-up movie theater. We finally asked directions and were pointed to the modern brick building across the street. You know, the only one with a flag flying outside. We bought our stamps and were given the requisite Par Avion/Airmail stamps for international mail and then set out to find a card. We were referred to the dollar store –which had no cards but did have plastic hangers for our clothes drying experiment — the drug store which had greeting cards but no postcards and finally to the tourist center which did indeed have only one postcard of the centennial celebration in 2011 but it was free. 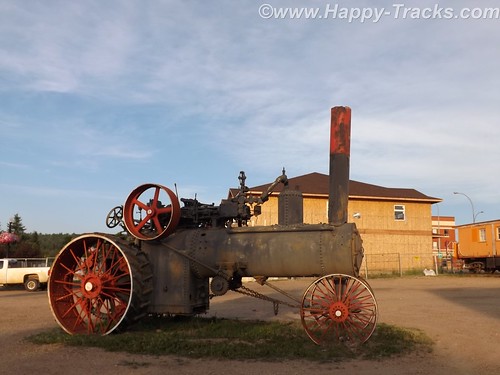 We mailed our postcard and headed out of town, headed west. 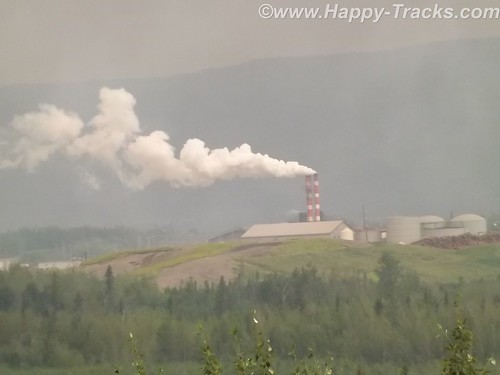 The highway is called the Northern Wood and Water Route. We passed through several small towns and also noted this industrial facility which we never really identified. We’re thinking it may be the Tolko OSB plant which makes construction products. More signs of a growing economy? The fields here and before we got to Athabasca were bright yellow and we think the crop was canola.
We stopped in Slave Lake for gas and lunch. At the gas station, we filled one of the 5 gallon cans we’d brought along in case we got stuck along the way. (We never used it.) The town is older and off the main road with signs pointed toward the lake, which is Little Slave Lake. The town had 5 or 6 motels and we ate at an A&W restaurant, something you don’t see much of in the States these days. Their root beer is as good as it ever was, I think. Our box of chicken came with French and English translations. It appeared to be a resort town and we never found the park at the lakefront.
We started noticing different road signs like “Important Intersection” and we met a truck with a “wide load” that appeared to be a two car garage coming at us. A lot of the signs were graphics instead of words, like a fisherman for the lake access or someone reading a book for the library or a water slide amusement park. One of my favorites (which took me a bit to figure out) was the two cars beside each other in a green circle to indicate a passing zone.
One of the little towns we pass through is Beaverlodge which has this huge statue of a Beaver which was built to mark the town name as well as pay tribute to the industrious beaver, which was the earliest distinctive symbol of Canada (per the sign posted next to the beaver.) 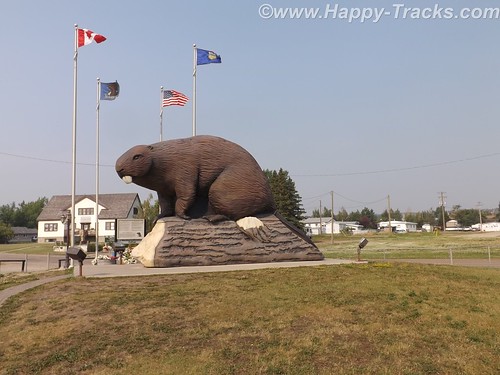 We came upon some one lane roads through construction, which seems to be a regular occurrence throughout our trip and during the summer months. 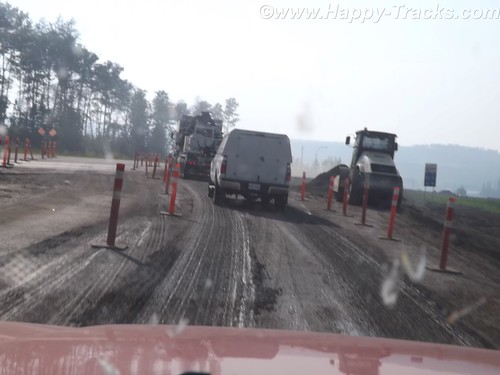 Eventually we cross into British Columbia and reach Dawson Creek, the southern and eastern end of the AlCan Highway — Mile 0. Note that it is now called the Alaska Highway officially but I will continue to use AlCan.
At Dawson Creek, we became aware of the smoke in the area. Forest fires were burning further south in British Columbia. We would see ash on the truck the next morning. 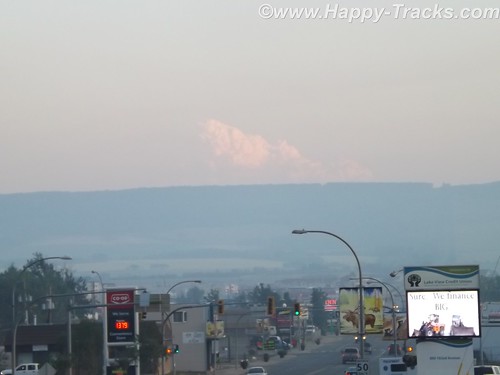 From a sign marking the 50th Anniversary of the Highway’s construction:

In the early hours of March 9, 1942, the first troop trains of the United States Army Corps of Engineers arrived in Dawson Creek to begin construction of the 2450 kilometre (1,523 mile) Alaska Highway. Overnight Dawson Creek was transformed from a small agricultural community of 500 into a bustling terminus for troops and supplies. At peak construction the population swelled to 10,000. Tent cities sprang up in farmers’ fields to help house the massive influx. The Northern Alberta Railway Station, the “end of steel”, became a centre of activity and sometimes, temporary home for thousands of military and civilian workers, may of who arrived with little knowledge of road building — or subzero temperatures.
During construction Dawson Creek served as a clearing house for supplies and equipment, as well as workers. In the spring of 1942 some 600 carloads of tractors, bulldozers, fuel and supplies arrived by rail from Edmonton for dispersal to construction camps along the route north.
Though the highway was completed in record time, it was not without its mishaps. One of the worst tragedies occurred in Dawson Creek in February 1943 when 60,000 cases of dynamite exploded in the centre of town, injuring many but miraculously, taking only five lives. The explosion leveled an entire city block and changed the face of Dawson Creek forever.
The modern city of Dawson Creek is rooted in those frenetic, exciting years of road construction. Though agriculture remains the driving economic force in the region, the transportation links forged through muckeg, ice and snow continue to play a major role.
The Mile 0 Post
The Traffic Circle located at the intersection of Alaska Avenue and 8th Street marks the designated Mile 0 of the Alaska Highway. A plain four-foot post once marked the site. In 1946, when this was hit by a car, a new Mile 0 Post was designed and moved to the centre of Dawson Creek where it stands today. The Mile 0 Cairn in Northern Alberta Railway Park was erected in the late 1950s to replace the original post that marked the “true” beginning of the highway north. 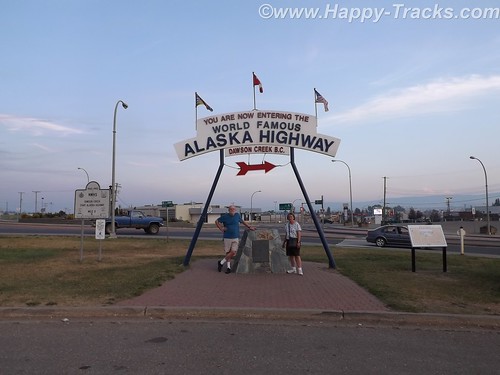 We took pictures of us by the cairn and talked to motorcyclists who were marking the occasion of their trip.
We also got a picture of the Milepost in the center of town, just as my mother did when they passed this way.
Tomorrow, we start on the AlCan. 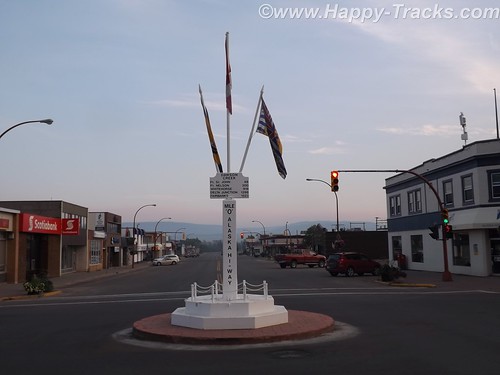 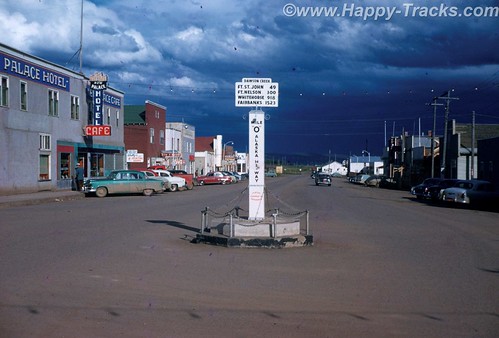