We left Grizzly Bear Lodge heading south towards Anchorage. Our plan included stopping at Independence Gold Mine State Historical Park and then go on to Anchorage for the night.
Grizzly Bear Lodge had a general store but no restaurant so we stopped at one of the first places we saw which was a small diner next to a service station. It wasn’t very busy and we were the only customers when we arrived. There were two ladies sitting at the counter. We took our seats and perused the menu. Not being especially hungry, Betty ordered the bowl of oatmeal from one of the ladies at the counter.
A couple of minutes later she came back out of the kitchen and asked whether Betty wanted raisins and cinnamon in her oatmeal. A short time after that, a young man walked in and from the conversation he was apparently a new employee. The discussion at the counter included how he was getting to and from work and furnishing his living quarters. Another group of 3 or 4 came in and took another table. Eventually, the young man brought our food and the bowl of oatmeal was HUGE! We have smaller serving dishes at our house! While we were eating, the woman who had taken our order left after making some friendly comment to the young man about him learning to wait tables.
We had eaten our fill and were getting ready to go when the cook came out of the kitchen to find out if Betty hadn’t liked the oatmeal since she had eaten so little. She told the cook that it was good but there was just too much. We thanked them and went on our way.
Other than the question from the cook, this was typical of the roadside cafes in the less populated areas in Alaska and in western Canada as well. Food was filling and often of the comfort food variety but quantities seemed better suited for lumberjacks than for a couple of retired tourists. Prices were higher than we’re used to seeing but this can be attributed to remote locations and differences in currency sometimes but the higher prices are accompanied by larger quantities. It was really a task to try to find a “light” meal. Back to the road.
About 80 miles out of Anchorage, Betty noticed that there was a road that went directly to Independence Mine that looked to shave 30 miles or more off our route. So we made the turn onto Hatcher Pass Road at Willow to take the direct shorter route. It was a narrower paved two lane road. We were hoping to make the morning tour which began in 30 minutes and it looked to be about 20 miles.
The road got narrower. There was no longer a painted line down the center as there just wasn’t enough room to give both sides a full lane and a stripe. The turns got a little sharper and more frequent and the pavement got a little rougher. And then about 10 miles in, the pavement stopped, the road crossed over to the other side of Willow Creek and the scenery got a little more rustic. 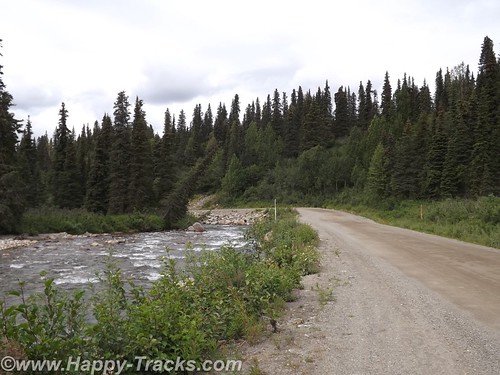 The dirt road included a few more rocks and we were alternating driving through woods and beside beaver ponds. 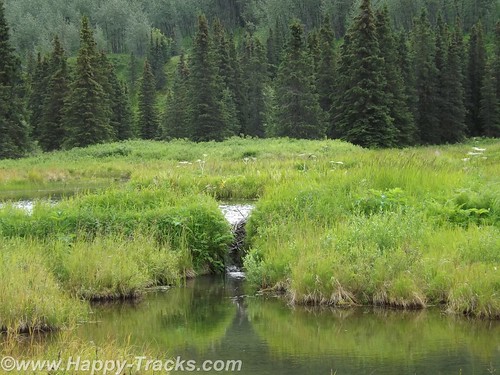 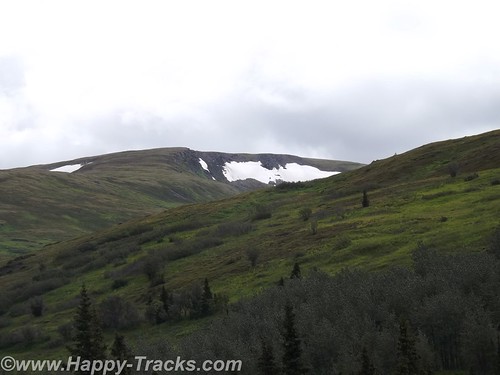 The scenery started to change and we were seeing mountain meadows and the road was climbing. We saw a couple of small tailings piles next to holes in the hills. (A tailings pile is the dirt and rocks extracted from a mine that do not contain ore. It is usually just dumped outside the hole.) The road had degraded to a two track and we were starting to see a few more cars coming the other way which require that one or the other of us stop to let the other one pass. 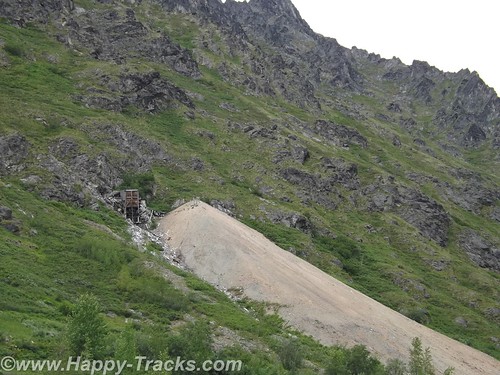 We came to split in the road and one way went to some small older buildings that were either an older mine or a farm/ranch. The other way climbed again. We climbed. We also passed two joggers seemingly miles from anywhere.
As we climbed again, we passed some modern industrial type buildings inside a fence. While we saw no activity, it was clear that it hadn’t been long since there had been. 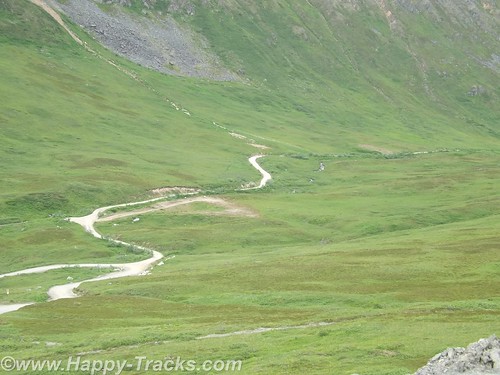 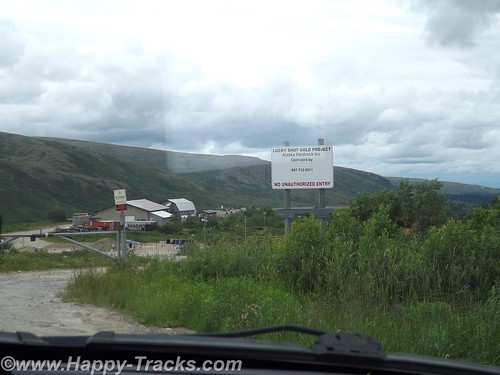 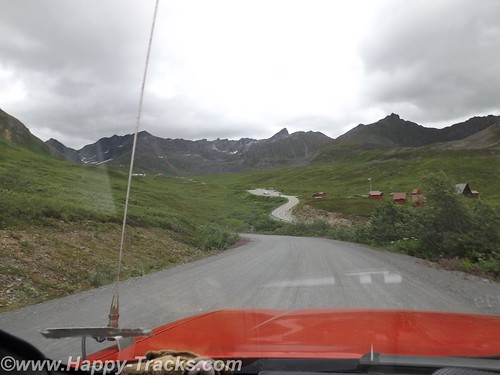 As we crossed the next hill (and felt a certain kinship with Heidi) the descent started and it was steep. We could see the end of our road, and look there, its a paved road leading up to the Independence Mine State Park! Its only been two hours since we started down this shortcut. But it was a ride we both enjoyed through some beautiful country.
There were times before we started this trip when I thought seriously about taking the car instead of the truck. Up to now, there had been no need for four wheel drive and the roads had not required the clearance and the car gets several MPG more than the truck and is reasonably comfortable but we wouldn’t have attempted unknown roads like this in the car and we really enjoyed the detour. 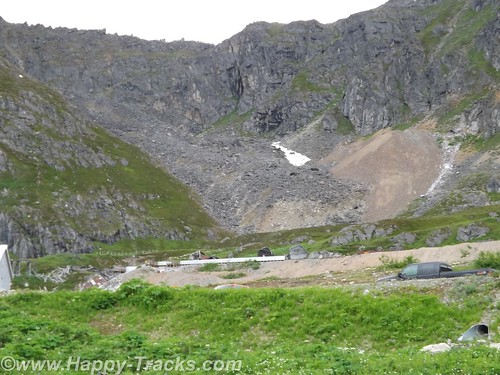 Independence Mine State Park is a closed gold mine. The modern buildings we had seen on the other side of the hill operates out of the same vein when it operates.
The Independence Mine was at its heyday of operations during the 1930s. Mining operations tapered off and stopped during World War II when gold mining was not considered an essential activity.

Robert Lee Hatcher discovered and staked the first lode gold claim in the Willow Creek Valley in September 1906, and others soon followed. But lode mining was expensive for an individual operator; it required elaborate tunnels and heavy equipment, so companies merged to pool resources and reduce expenses.
What is now called Independence Mine was once two mines: The Alaska Free Gold (Martin) Mine on Skyscraper Mountain, and Independence Mine on Granite Mountain. In 1938 the two were bought together under one company, the Alaska-Pacific Consolidated Mining Company (APC). With a block of 83 mining claims, APC became the largest producer in the Willow Creek Mining District. The claims covered more than 1,350 acres and included 27 structures. In its peak year, 1941, APC employed 204 men, blasted nearly a dozen miles of tunnels, and produced 34,416 ounces of gold worth $1,204,560; today $17,208,000. Twenty-two families lived in nearby Boomtown, with eight children attending the Territorial School in the new bunkhouse.
By 1942, the United States had entered World War II, and the War Production Board designated gold mining as nonessential to the war effort. Gold mining throughout the United States came to a halt, but Independence Mine continued to operate because of the presence of sheelite. Sheelite occurs in some of the quartz veins along with gold, and was a source of tungsten, a strategic metal. But because Independence Mine’s scheelite production was low, the exemption was short-lived. In 1943, Independence Mine was ordered to close.
The wartime ban was lifted in 1946, but gold mining was slow to recover. After the war, gold could be sold only to the U.S. government at a fixed rate of $35 per ounce. Postwar inflation raged, and gold mining became an unprofitable venture. Finally, in January of 1951, after mining nearly 6 million dollars’ worth of gold, Independence Mine was closed by APC, and a chapter of Alaska’s gold mining history came to an end. In 1974, Independence Mine was entered into the National Register of Historic Places, a list of cultural resources significant to American history. In the late 1970’s, 271 acres of land were donated to the Alaska Division of Parks & Outdoor Recreation for establishment of Independence Mine State Historical Park. On January 16, 1980, title to the acreage was transferred to the State of Alaska. From http://dnr.alaska.gov/parks/units/indmine.htm

The park is working on restoration of the buildings there. The Superintendent’s house is now the visitor center. Its a large two story house with some historical displays. 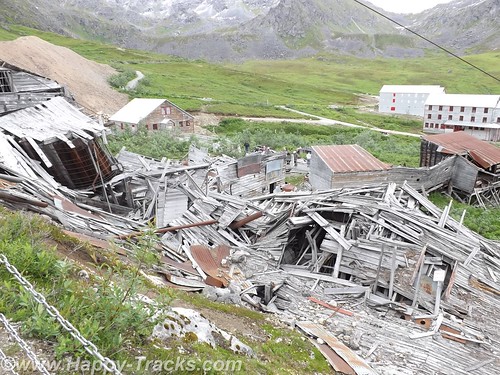 Originally, the men who worked the mines were housed in two story dormitory-style buildings (seen in the picture above). There were separate buildings to support the mine’s operations such as machine shops and tool sheds. 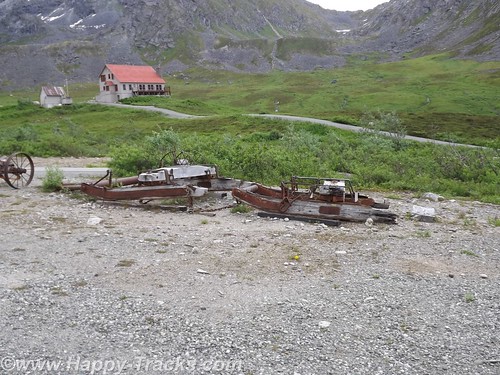 There was a blacksmith’s shop and administrative buildings such as a payroll and assayer’s office as well as a commissary and a dining hall (seen in the picture below). 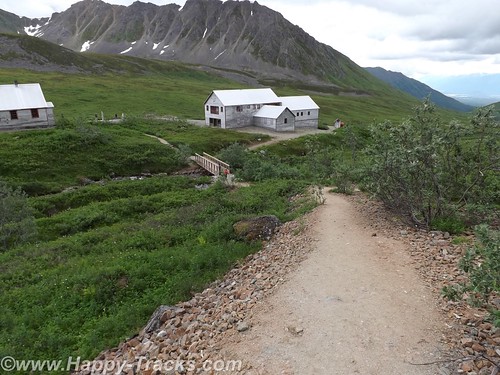 Other buildings included buildings containing apartments for managers and their families. Over time, the working men brought their families and the mine permitted them to build their own quarters on mine land. 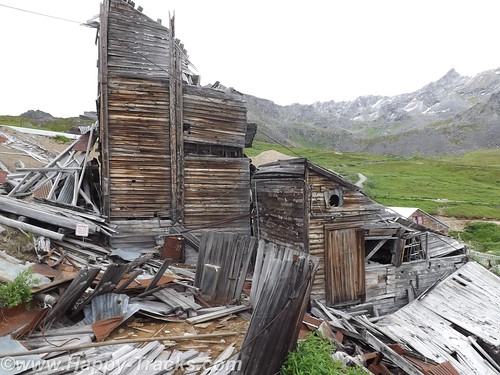 We learned something interesting about miners’ workshifts. After many years of watching movies where the men line up at the beginning of shift and walk in together and then all walk out together, we hadn’t noticed how the two groups never seemed to pass each other. The miners worked 10 hour shifts. At the end of the shift was the time for any blasting after everyone had gotten out. The two hour wait before the next shift went in was supposed to allow the gases and dust from the blast to settle before sending the workers in again.
Some of the buildings are used now for park support activities and a couple are in the middle of renovation/restoration. 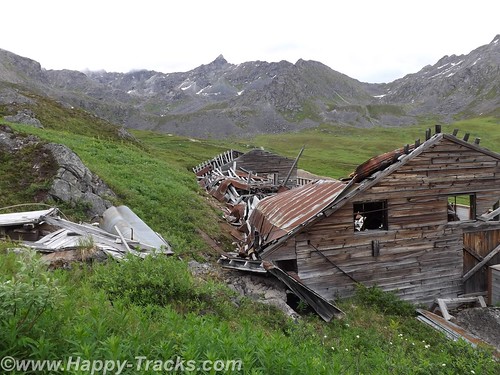 Some are completely collapsed and awaiting extensive work. There was a display in the superintendent’s house on the differences in preservation, restoration and reconstruction. The park is charged with determining the best course for each building to maintain historical accuracy for the park. Although isolated, it should be noted that the mining buildings had electricity and running water even in the 1930s.
We left for Anchorage, passing between Palmer and Wasilla so we didn’t see any famous people, or at least weren’t aware of them if we did passed by.
Our first stop in Anchorage was the visitors center where we got recommendations for dinner and ended up at Crush, a wine bar where Keith had the elk and pork meatloaf with vegetable stuffing. It was quite tasty.
We also visited Oomingmak, a co-op store for hand-crafted quivit items. The co-op is owned by 250 Native Alaskan women spread throughout the state. Quivit is the downy-soft underwool shed from a muskox. We recommend a stop by the store whether or not you intend to buy anything. Their website is at http://www.qiviut.com/ We did ask the clerk there for recommendations of things to see while in the area and one of his recommendations was Hatcher Pass.
We stayed at the Super 8 in Anchorage near the airport. We apparently got the last available room but there were a couple of problems with it. For example, when we went in, it was obvious the bathroom had not been cleaned so we went back to the front desk. The desk clerk told us he was the only one on duty at the time so he would go clean it while we waited in the lobby. He did. After we went to the room, the toilet wouldn’t flush down so back we went to the front desk. With the proper equipment, we cleared that one up ourselves but then the elevator seemed to be having issues. Luckily we were only on the third floor. After the initial issues, the room was great and we spent a peaceful night.
You can see all of the pictures from this leg of the trip here.
We invite you to continue along with us and hope you enjoy the account!