On leaving Fairbanks, we gave some consideration to traveling north up the Dalton Highway towards the Arctic Circle or even as far as the Arctic Ocean but it came down to making a choice between either of those and having to cut out a day or even two to somewhere else as we had reservations on the weekly ferry ride from Haines in about a week. The side trip just wasn’t worth it so we headed to our next planned destination, Denali National Park.
Denali National Park and Preserve dates back to 1917 when Congress approved the creation of McKinley National Park. While its most famous feature is the tallest mountain in the US, the park and preserve includes 6 million acres of wild country with a single ribbon of road through it. But first we have to get there! 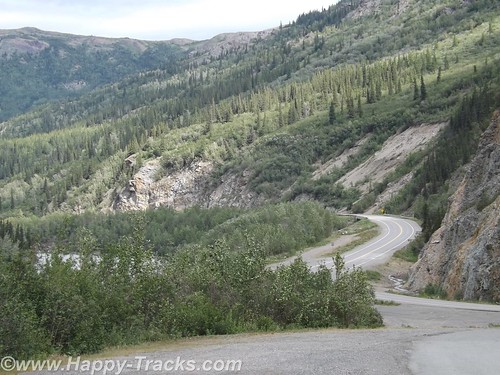 The ride from Fairbanks to Denali started out alternating between relatively flat with mountains in the distance or else riding along higher up with the scenery falling away to either side of the road. We crossed over the Nenana River where there was an old tug boat pulled up along the shore which had pulled freight up and down the river.
Eventually the road begins the dip into a canyon following the course of the Nenana Creek. We encountered more construction both for roads and bridges. The road construction had a pilot car for a length of unpaved road but the short bridges were controlled by a flagman or a portable traffic light. 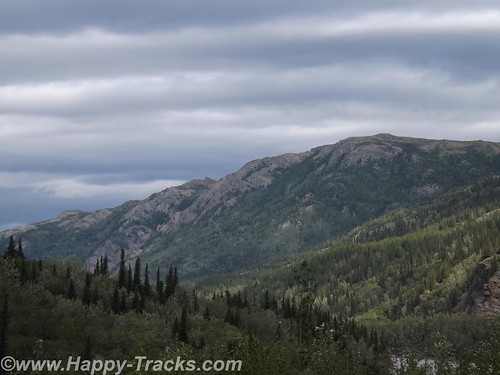 The skies were partly cloudy which resulted in light patterns on the landscape for additional texture. 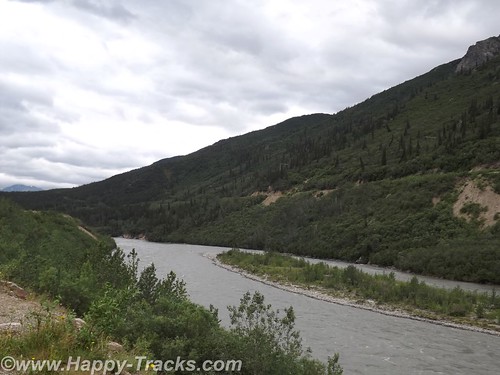 Just before we got to the road into Denali, there was a village of hotels, cabins, resorts, stores, and outfitters catering to the tourist trade. They all looked to be doing a good business this day.
Charles Sheldon, a gentleman hunter from Vermont and others lobbied Congress for nearly a decade before persuading them to create Mt. McKinley National Park in 1917. In 1921, Harry Karstens, an outdoorsman and dog musher was hired as the first park superintendent. Gold miners and others in Fairbanks and nearby called the icy granite mountain Mt. McKinley. Sheldon referred to it as “the mountain” or Denali, the Athabascan name meaning the high one. Mt. McKinley is now officially 20,237 feet above sea level, the highest in North America. This figure is 83 feet shorter than the 1952 number (which would have been when my folks were in the area.) There is this interesting article on Discovery.com which talks about why the differences.
Along with the wild landscape there were also animals in the area that were to be protected. Specifically, the Dall sheep in the area were being aggressively killed by market hunters. Per the stories we were told there, the market hunters would kill the sheep they needed to market and would also kill the other sheep around and leave them to rot to limit their competitors ability to provide meat. The National Park and Preserve designation was a small step in providing some control over that situation.
Arriving at the park entrance, the roadway goes to the campgrounds and also to the visitors center. From the visitors center, there are options for interior transportation. There are guided tour buses which travel into the interior of the park and various shuttles to different points within the park. 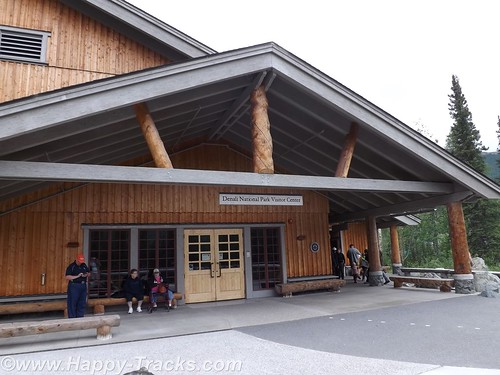 We went directly to the visitors center. This is the spot to get acclimated and find out about the various accommodations for getting around. The visitors center also has a small cafeteria and a gift shop. The 85 mile road through the park has access limited to the tour buses and the campers’ shuttles. There are also flight-seeing tours from nearby Talkeetna that take you around, some even land to let you walk around.
We chose to take the short shuttle to the Sled Dog Kennels. The dogs are working animals at the park providing access to remote areas and support for working and research parties even during the winter months. More about the kennels here.
The bus (similar to school buses) takes you on the 10 minute ride (or it could be except for the stops for road construction) to the kennels. During the summer months, rangers and the dogs demonstrate a working team. Before the demonstrations in the summer, you get a chance to visit with and pet the dogs. Visits and petting are opportunities year round but the demonstrations are summer months only. 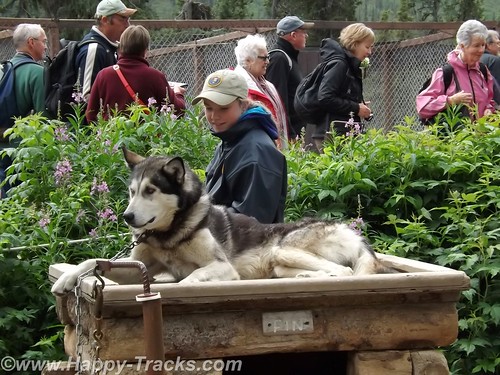 We were surprised to learn that the dogs are controlled by voice command only. For some reason, we had always thought there were reins or similar like larger draft animals.
Each position in the dog team has a specific purpose and different dogs are better suited for each position. Nearest the sled is the wheel dog. The wheel dogs are the strongest and provide momentum to get the sled up on the surface and moving (like getting a boat up on plane). 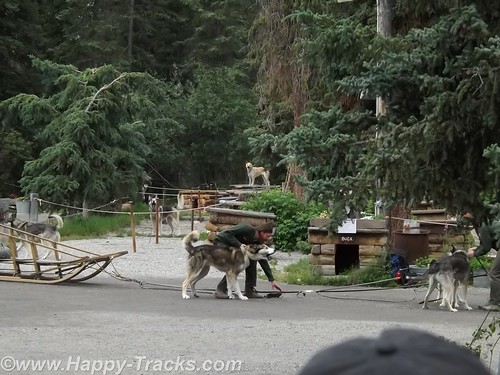 In front of the wheel dog is the swing dog. The swing dog provides power but is also trained to swing out on a turn, rather than follow directly in the tracks of the lead dog. The lead dog responds to voice control to turn, go or stop. The dog team may include up to 12 dogs depending on the load and course to be run.
The dogs typically have a 9 year life on the sleds with an average 14 year life span. That link above even talks about adopting retired dogs. 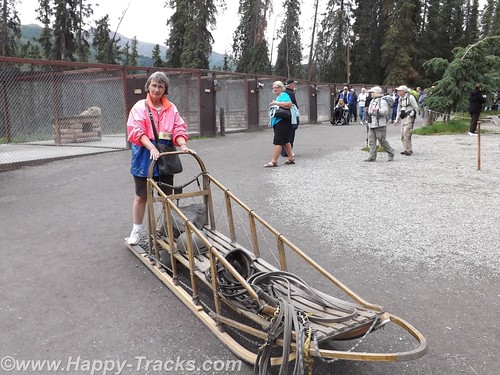 As an aside, we saw the tourist couple we met at LARS in Fairbanks and said hello.
We rode back to the visitors center and decided to take one of the shuttle buses for a brief ride around to the campgrounds. It became more clear that many of the tourists in the park are camping or hiking parts of the large park. While on the shuttle, we stopped at the train crossing to let the Alaska Railroad Denali route train go by. Many tourists will board the train for the ride between Anchorage and Denali with a stop in Talkeetna for more of the beautiful scenery. 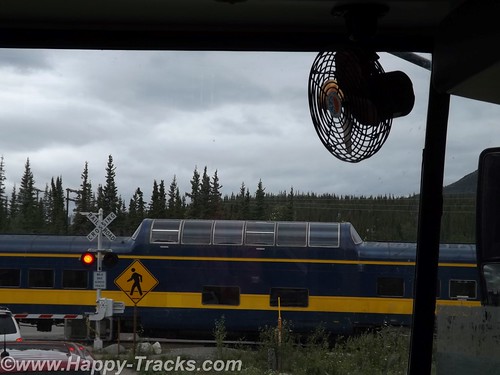 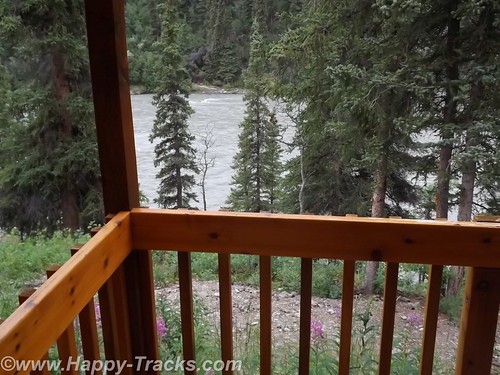 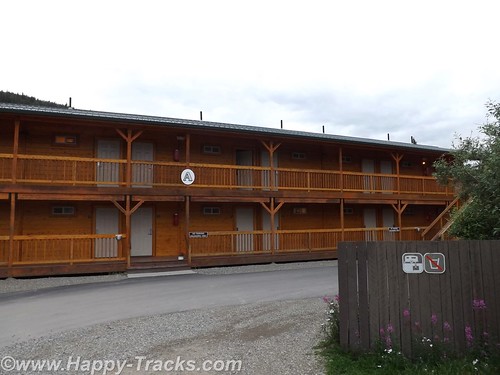 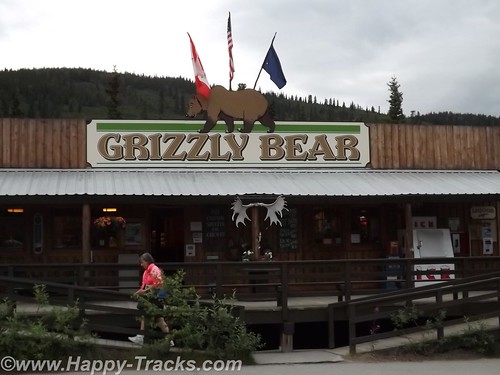 After several hours at the park, we headed out for our accommodations which had been recommended by a fellow on ExpeditionPortal forums. Healy Denali Grizzly Bear Cedar Lodge is just a few miles south of the park entrance (although our GPS directions sent us north instead). The Grizzly Bear Cedar Lodge is away from the cluster of hotels in the village outside the gate and has RV sites, a small general store, a laundromat and a gift shop. The Cedar Lodge itself is set on the banks of the Nenana River. Its not as expensive as the village but doesn’t have all the shops and entertainment within walking distance.
We did get a recommendation for the restaurant just a bit further south, 229 Parks. The food was a more local produce with many non-fried food choices. We had the salmon and the crabcakes and would recommend both the restaurant and lodge to visitors to the area provided you have transportation with you. 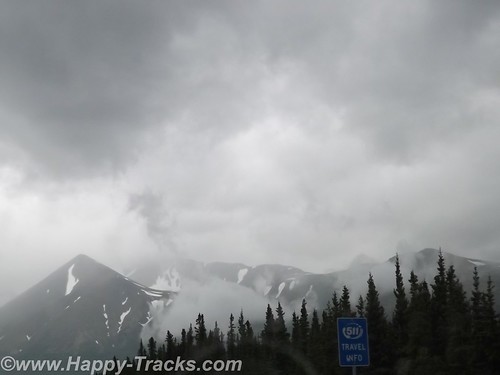 The next morning, we headed south towards Anchorage. We still hadn’t seen Mt. McKinley but there were supposed to be several points along the road where we could see it, weather permitting. As we drove along, we saw fog and clouds where Mt. McKinley should be but we never saw the place where we could get out weather permits and thus left Alaska without seeing the Mountain.
You can see all of the pictures and 2 more short videos from this leg of the trip here.
We invite you to continue along with us and hope you enjoy the account!