In the early 50s, Mom and Dad went up and down the AlCan twice with my sisters (before I was born). In those days, mobile homes were still pretty mobile. On the second trip, they pulled their Spartan mobile home behind the Packard on the way up and behind a Chevy pickup on the way down. 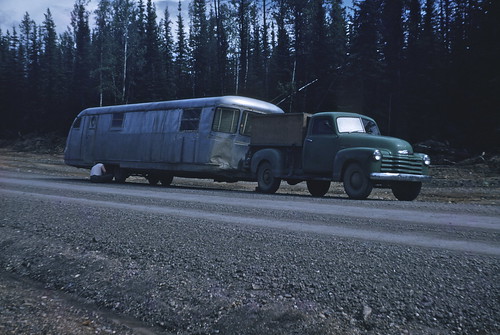 Traveling along with them on the way to Alaska were 4 other families, also pulling their own mobile homes. The adults in those five families were lifelong friends, in part due to their shared adventures. To the best of my knowledge, two of the wives are still alive. I know my Mom stayed in touch with those folks until her death in 2007.
On that second trip, Mom had an Argus C3 that she bought with money earned from baking pies which Dad sold at work. I heard about their trip my entire life and saw the pictures and had this trip on my “bucket list” before I knew what a bucket list was. You can find quite a few of Mom’s pictures here.
On Sunday, July 6, 2014, Betty, my wife and I loaded up our Chevy Colorado and left Maryland with plans to reach Alaska and to retrace some of their route.
Much of the 1950s AlCan highway no longer exists. The AlCan was hastily constructed in 1942 as a means to reach from the contiguous United States to the Alaska territory as part of the effort to defend the territory against the Japanese in World War II and also to enable the transport of US warplanes to Russia, our allies in WWII.
Our 2014 trip included trying to re-trace part of their route and also to visit some places we’d not seen before. Our trip included time in National and state parks as well as kitschy tourist destinations along the way. 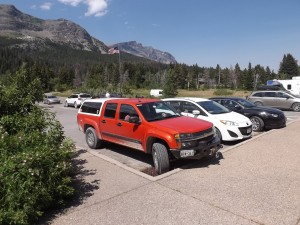 Our trip was taken in a Chevy Colorado crew cab pickup truck. There was no trailer but we did have a shell on the back and had taken the rear seat out to accommodate a 43 quart refrigerator/freezer that ran off of the 12 VDC accessory plug along with a spare battery. We packed a small bag with 3 or 4 outfits of shorts and t-shirts, a larger bag with several changes of warmer clotes and a loose bag with our winter coats, gloves and boots. We packed some basic foods, a camp stove, some cheese sticks and trail mix. We also had 2 spare tires, a container with an extra 5 gallons of gasoline and my toolbox and recovery equipment and a first aid kit and fire extinguisher. Electronics included our two cell phones, the truck’s OnStar setup, a laptop PC, a digital Fuji camera, a CB radio, a Ham 2M handheld, and a device called a SPOT tracker for emergency communications and routine checking in via satellite. See Find Me Spot
Along the way, we did laundry using a 5 gallon plastic bucket (originally a deli-sized container of pickle chips) with a gamma — leak resistant — sealed lid to wash clothes. We would add the dirty clothes, a little detergent and about 4 gallons of water and let it ride in the back of the truck to agitate. At night, we would take the bucket inside with us and rinse the clothes then hang them on plastic hangers from a ratchet strap strung between the two rear seat assist handles in the truck. Got a few odd looks at border crossings but it worked out well. 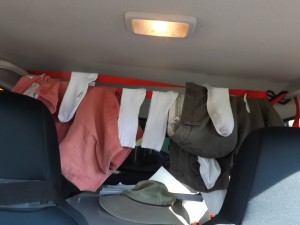 By way of preparation, we had to prepare to leave the house for 6 weeks to 2 months (our itenerary was fluid). This meant paying the routine bills (utilities, storage rental, newspaper, cellphones) in advance as we don’t use online banking or bill paying; arranging for the grass to be cut, the mail held and the newspaper delivery stopped. We also notified a few close, strategically-located neighbors of our coming absence and expected comings and goings around the house. We also attempted (unsuccessfully) to arrange for some Canadian cash through our bank and made certain our credit card company was aware we would be on the road and expecting to use the card in places and with frequency outside our normal usage patterns.
The Washington Post didn’t manage to process the vacation hold on the newspaper but our neighbor intercepted most of the unplanned deliveries. Bank of America couldn’t process our request for Canadian cash in sufficient time to get our cash before we left but a TD Bank in Alberta accepted our ATM (ABM for you Canadians) card to dispense the desired currency. One of the lamps on a timer at home decided to blow the bulb sometime (1 day? 6 weeks?) before we returned. The credit card was refused once on our trip but we think that may have been input error by the hotel rather than an issue with the CC company. Of all the logistics to be arranged, these were minor glitches that had minimal impact in the grand scheme of things.
A few statistics for your consideration.
Total driven miles: 11,704
Gasoline consumption: 556 US gallons at an average cost of $4.20 per gallon.
40 hotel nights and one on the ferry between Haines AK and Prince Rupert BC
14 states traveled and 3 Canadian provinces
1 flat tire and 1 cracked windshield
Most days, we posted up to 10 pictures on Facebook which some of you have already seen. This blog will share our story and give you a chronological account of our trip along with some more pictures and the story behind some of those pictures you’ve already seen.
We invite you to come along with us and hope you enjoy the account!