The morning started out with a light misty rain which would continue most of the day but the day would end with some new sights and meeting some new people.

We started out with Breakfast at the Hatteras Island Inn and decided to head for Ocracoke. We wanted to do some shopping and look around some in the village where we hadn’t before.

We arrived at the ferry dock at about 20 past the hour, not sure what the schedule was today since we had watched the crossings on Friday being more frequent than the advertised on the hour sailings. As it turned out, they are still on the hour but will put a second boat in service when the need makes itself known. We were to ride the Croatoan, one of the newer, larger ferries with the portion of the deck that’s covered. Sharing the ride with us were some of the folks who are in town for Bike Week in the OBX, the motorcycle kind.

The ferry was to be packed. The motorcycles were not all one big group when they got on but when the crew saw the second contingent of bikes, they had two of the cars back out from under the cover to allow all the motorcycles to be sheltered. Sure it took a few extra minutes but it demonstrates putting your guests’ comfort first with just a little extra effort. Good show!

When we arrived on Ocracoke Island, the rain continued and the line stretched from the dock around the curve, past the visitor parking area. A significant part of the line was motorcycles and their riders waiting in the rain. Well, truth be told, a significant part of the line was motorcycles and their drivers as their passengers stood under the shelter out of the rain. I heard one of the riders relating how she had asked about the priority system which allows residents to jump to the head of the line and why those folks riding motorcycles in the rain didn’t qualify as priority. The story was told with some good nature so let’s give credit. Of course, she hadn’t yet gotten to experience the ferry crew making a space under the cover for the motorcycles and their riders.

We stopped at Howard’s for lunch as per usual, along with many many motorcyclists. Although we usually chow down hearty, we decided to go a bit lighter this time and got a “small” pizza. Small wasn’t especially and their crusts are thick so it filled more than we expected. It was tasty as Howard’s food usually is.

We next went into town to shop at Mermaid’s Folly which seems to be the only place we can find a particular maker of skirt but they had none in the right size this time.

Our next stop was a ride out to the beach and to see the area around the South Point. Plenty of strings and signs and a few fisherman were braving the rain. The rough waters didn’t seem to be helping them at all. We turned and headed north to what I believe may be the only place in the entire Recreation Area where you can ride from one ramp to the next on the beach, that being between ramps 70 and 72. The beach was blocked just north of 70. Cruising up the highway later, it appeared you might be able to enter and exit at ramp 67 as well but you wouldn’t be able to get to the next ramp. Supposedly, under the new ORV plan, the Park Service may add a few ramps to allow some spots where you can enter through one ramp and exit at the next one instead of doubling the traffic as you enter then backtrack to the same point to exit. Time will tell, I guess.

We went back into the village to see some of the backstreets. We went past the school, several inns and shops but none that seemed worth a special stop. So it was back to the ferry and ride over to Hatteras again.

We swung by the Graveyard of the Atlantic Museum which was about to close so we skipped i(hours are 10-4, Monday through Saturday). Next we decided to try again to find the Ramp 55 wreck. Per the latitude and longitude coordinates, we sat on top of the spot but saw nothing.

Net we drove out the pole road and reached the soundside where it became clear how close the channel has shifted to shore. Repeated dredging when you can’t/don’t move the sand any significant distance just doesn’t hold long.

Back to the Hatteras Island Inn and gave a call to Rob Schonk. We had been trying to get together for a face-tot-face this weekend and finally managed to join he and his wife Linda for dinner at the Atlantic Coast Cafe in Avon. Betty had the grilled shrimp and Keith had the special which was crab cake, coconut shrimp and herbed mahi-mahi. We think this may qualify as the best meal we’ve had so far this trip.

After dinner, we horned in on an invitation to meet JAM and some of the folks from the OBC forums at JAM’s place. As I’m horrible with names, I won’t try to name all the folks we met there but will speak highly of the great hospitality and some interesting folks. We are appreciative both for the hospitality and the invite. 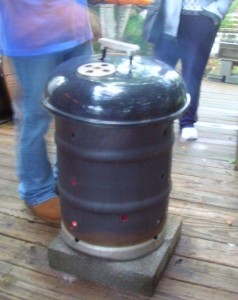 Considerable discussion of life on Hatteras Island and the ongoing issues with the NPS including the Congressional hearings relative to HR 4094 and a companion bill in the Senate.

Then it was back to the hotel to settle in for the evening.